My mother called me a bird. Last December, 18 days after I graduated college, I flew south for winter to sweaty Santiago, Chile, where the seasons are reversed and summer was just beginning.

But warm weather wasn’t the purpose of my journey. It’s winter now (in late June) and thankfully my intentions and ideas have panned out. I’ve worked a TEFL (Teaching English as a Foreign Language)- certified English teacher for almost six months now, and my Spanish skills have finally progressed beyond speaking in the present tense.

The actual distance is the strangest thing. There are times I’ve stood on the coast, with my ankles in the freezing Pacific Ocean, staring up and imagining where I am, envisioning myself as a dot on globe, almost 5,000 miles away from home. Like many Southerners, my friends are also my family and detaching myself from them was one of the most difficult things I’ve ever done. How the inventors of Skype haven’t won a Nobel prize is beyond me as it is the best invention of the 21st century.

But rarely do I feel lonely. I was thrilled to discover that Chileans believe in the same Southern hospitality we’re accustomed to back home. It is quite common to meet someone at a bar one night then have them invite you over for dinner the next. Encounters on the street don’t stop at, “Hi, How are you?” but “Where are you going? And, how is your mother?” Every taxi driver, server, bank teller and grocery-store check out girl is fascinated with my reasons for coming here. They are also incredibly eager to use any knowledge of English that they have. Either that, or my Spanish is so bad that they’re choosing to use English. 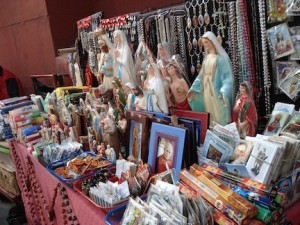 Chile is 70 percent Roman Catholic and colorful reminders line the sidewalks and corners of the beautiful ancient churches in Santiago.

Chile’s enterprises have a great need for learning English to further interactions with the U.S. and the U.K. This is why teaching English is such a lucrative opportunity. However, everyday citizens have very little need, so knowing and using Spanish is much more of a necessity than I imagined. This demand alone has improved my vocabulary, but I’ve had just as many slip ups as success stories.

One night, a Chilean acquaintance invited my boyfriend and I over for dinner at his apartment. He has one of the most incredible views in the city – endless urban lights, surrounded by the Andes mountains – so, language insecurities aside, we accepted the invitation. As the evening progressed, several more of their Chilean friends arrived, and with them, bottles of Cabernet and Carmenere, Chile’s vino specialties. At one point, I dropped my wine glass, spilling the wine and breaking the glass.

In an attempt to apologize to our neighbor, I stood up and said, in Spanish,  “I am so embarrassed.” Well it turns out, the word for “embarrassed” (embarazoso) and “preganant” (embarazada) are extremely similar. So I actually said, “I am so pregnant.” Without a beat, and in perfect English, one of their friends replied, “Well, then you shouldn’t be drinking!”

Yes, it was a laugh at my expense. But it was also one of my favorite memories of this trip so far. Join me as I attempt to put into words my experience of living in Chile’s southernmost nation as a girl from the South. I’ve already taught several of my students how to use “y’all”, and I’m not stopping there.