Chi-chi-chi-le-le-le- Universidad de Chile! It was my first South American fútbol match, nay my first professional soccer match ever, and I was trying my best to keep up with the chanting. At first I was a little homesick as I thought about my constantly cleat-clad stepbrothers the whole time.

But this game was one of the wildest, cultural experiences I’ve had so far in Chile. The fans of each team sing different songs throughout the entirety of the game. Although I tried so hard to learn the words of the jumbled Chilean screaming and singing, I could only join in for the more simple songs. To be completely honest, I was nervous about entering the stadium. I had heard a few horror stories of gringos getting harassed by rowdy fans, and my blonde hair isn’t exactly inconspicuous. Although it was a bit of a hectic, crowded squeeze, it was nothing compared to my daily 8 a.m. metro commute.

Once we found some seats in the galeria (a.k.a. the cheap seats) the fans sitting around us were very warm and jovial. There were several children seated on their parents’ laps and shoulders, wearing a flag as a cape or singing the chants along with their siblings. 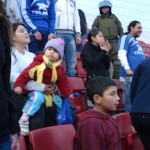 Even Universidad de Chile's younger fans know the words to the several different songs and chants during the game.

This sounds really campy, but this is really the only reason I like sporting events: there exists this familial camaraderie between strangers that doesn’t exist in the streets and in the subways. I’ve experienced this multiple times at my 90,000-seat SEC alma mater football (not fútbol) stadium, but there was something about the singing that made this experience… meaningful. Here was a five-year-old bundled up in a Cinderella overcoat, a 13-year-old with braces, a 35-year-old man with long hair and back tattoos, and an elderly man with tan, leather skin and white hair, all singing the same song and whistling. It was as if that old man was once the five-year-old, and they have grown up in this culture that worships this sport all their lives. 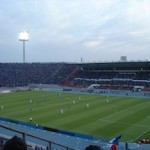 The sun sets over the Universidad de Chile vs. Bernard O'Higgins fútbol match at Estadio Naciona.

Lying below the surface of this camaraderie, it’s important to mention Estadio Nacional’s tragic past. In 1973, the arena was used as a torture center for the military dictatorship under the infamous Augusto Pinochet. The transformation of the structure into a fútbol arena is a tangible testament to how Chile has been able to recover from this horrible chapter in her life.

1973 was not that long ago, so many people in this city still speak about family members who were murdered or went missing. Many still don’t know what happened to them. Evidence and inscriptions by these family members are carved and written on parts of the stadium: a reminder that although victory after victory has been celebrated in this space, loss hasn’t been completely healed and forgotten. That Saturday may live to be one of my favorite days of our journey. I am actively accomplishing my primary goals and purposes of this trip: I am seeing new things, speaking a new language and even learning a few new songs to sing.