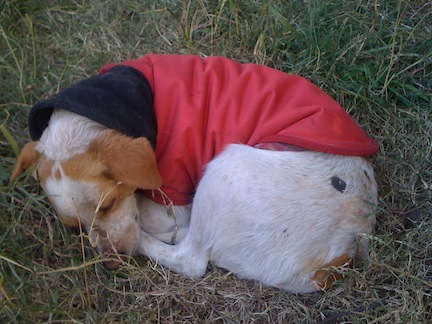 This stray was all bundled up on a cold and windy afternoon. And look closer at his neck...he' s even wearing a scarf!

Upon arrival, the dogs are a spectacle. Some are asleep in sunny spots on the sidewalk. Others are cooling off in a fountain. They beg for table scraps from patrons of patio restaurants. They cross the streets just as people do, as if they’ve learned to decipher the crosswalk signals.

Journalists estimate that Santiago has had a street dog “problem” for about 25 years. With an estimated 3 million strays roaming the streets, parks, patios, markets and historical landmarks of Santiago, I suppose it’s difficult to label it anything but a “problem.” It wouldn’t be a stretch to say they are as common as squirrels. Although there have been rumors of an initiative to round up all strays and sterilize them, the locals know this can’t be true.

I’ve grown up with a dog in my family since I was out of the womb. Being a dog lover is in my blood, so seeing so many strays – especially at first – was sad and still is disheartening. But the life of a Santiago street dog really ain’t so bad– they become residents of the barrios (neighborhoods)– therefore they are well-fed with scraps and leftovers from the restaurants and grocery stores. They accompany homeless people on their makeshift cots of cardboard and old blankets. They get tons of love and affection from locals and passersby, albeit brief and quick to accompany a lively hand washing. 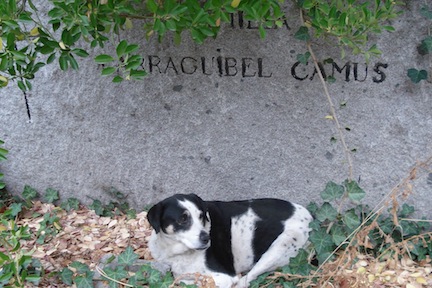 Saw this little guy when we went to visit Cementerio Nacional, the national cemetery in Santiago. Maybe he was visiting an old friend.

I was nervous about what would happen to the street dogs once winter made its way into the city. July, Santiago’s coldest month, makes for some freezing nights and mornings. Apparently I’m not the only one who worries about the street dogs– many of the locals donate unwanted clothing to help keep them warm. It’s not uncommon to see a pit-mix sporting an old Arizona State sweatshirt, or a sleepy shepherd mix wearing a fleece cape. It makes me laugh every time.

We once stopped on our way to a restaurant to watch an incredible 5-piece band play a few original songs. Two street dogs came from out of nowhere and made their way to the middle of our circle. They then sat in front of the musicians and began to howl and bark– they joined the band! They would then bark and wag their tails when it was time for applause.

It’s as if every street dog (or group of street dogs– they tend to run in packs) has its own personality. We have yet to encounter an aggressive street dog– they are always friendly and personable. If my boyfriend and I could have taken anything down here with us, it would’ve been his precious pup Laila, who I miss every day.

Something about having a dog at home waiting for you makes a long day feel worth it. So here, it’s hard to not want to take one of the strays home, wash him up, get him vaccinated and call him our own. But we know this would do more harm than good, because we would have to abandon him with heartbreak once our journey is done. Plus our landlord would probably kill us!

For now, I’ll continue feeding them snacks here and there, giving them some affection, and washing my hands. 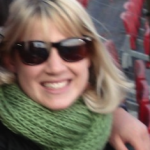 Chelsea Cook is a journalist from Atlanta, who taught English in Santiago, Chile, and authored the series “Our Southern Girl in South America”.