Take two former lawyers with great taste and a whole lot of gumption then y’all have got the foodie heaven of West Egg. Atlanta’s up-and-coming Westside is history in the making, thanks in part to businesses like this new restaurant.

Owners Jennifer and Ben Johnson met while attending law school at Duke. Right before graduation, Ben popped the question and they’ve been together ever since. They both practiced law at large firms in Atlanta following law school before Jennifer got the itch to open a restaurant then left her practice in about 2002 to start working on what would become West Egg.

“It was opened on a shoestring, with friends and family rallying round to help paint, build and otherwise turn a raw space into a slightly less raw restaurant,” the couple explained. Ben kept his day job for several more years before joining West Egg full time in 2007.

The name West Egg comes from the fictional town in “The Great Gatsby”, which has always been a favorite book of the Johnsons. “We even had a passage from it read at our wedding long before there was any thought of a restaurant,” they said. “When we found the original space, the Westside was a far different place than it is today. Bacchanalia and Taqueria del Sol were pioneers just up the street, but back then there was nothing in the area to speak of south of the railroad track and 14th Street except Northside Tavern. It was the Westside; we were serving coffee and breakfast; West Egg just jumped out as the perfect name.” 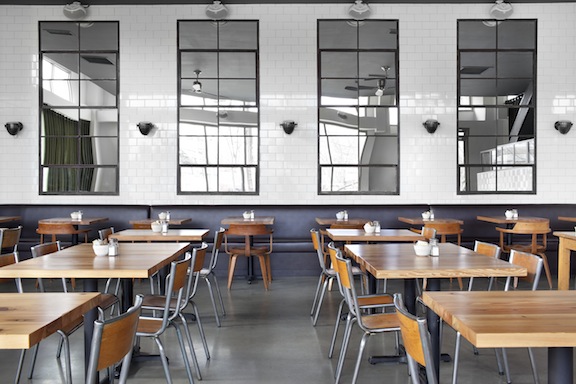 West Egg is now housed in Westside Provisions on Howell Mill. The space is ideal for dates, working lunches, coffee breaks or even just to come and hang out. “In moving from an old industrial building into a brand new space, we tried to carry over references to the industrial character of the surrounding neighborhood. From the mirrored reclaimed factory windows in the dining room to the old chicken-wire safety glass around our bakery area, almost all of the furnishings are vintage or reclaimed in some way.”

“Our menu is based around Southern comfort foods. Many of our desserts, such as the Coca-Cola cupcake and buttermilk pie, are based on my grandmother’s recipes. We make our own pimiento cheese, pickle our own okra, and put bacon on just about anything. Our dinner menu includes Pig & Grits (slow roasted pork shoulder over grits) and Country Captain (a traditional low country dish of chicken stewed in tomato curry). Our boozy milkshakes are based on our homemade vanilla softserve and include sweet tea (made with our housemade liqueur) and bourbon chocolate. Our cocktails include the Maple Mint Julep (sweetened with maple syrup) and the Seersucker (gin, basil, and lemonade).” 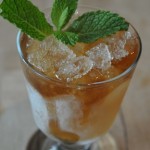 The Seersucker. Imagine a Mint Julep...but even better!

“The South always has had a defining tradition of graciousness. Hospitality, to kin and stranger alike, simply is a part of life.  We have tried to capture that tradition of Southern comfort and hospitality with West Egg but also free it from triteness or too much nostalgia. We want a come-as-you-are casualness befitting a dynamic city like Atlanta, where tattooed twenty-somethings sit next to families with young kids who sit next to pinstriped lawyers who sit next to young entrepreneurs on laptops who sit next to students twenty minutes out of bed – and who all feel equally welcome and at home.”

On one afternoon, this PrettySouthern writer found herself writing with an iced cafe au lait, which lead to a beer sampling and then a piece of buttermilk pie! For more information on West Egg, check out their website and tell Ben and Jennifer that you saw them on PrettySouthern!