Interview with “The Help”

Atlanta was recently graced by shining stars. Kathryn Stockett, whose literary constellation always shines bright over her home city, was in residence with long-time pal Tate Taylor and actresses Viola Davis and Octavia Spencer. Better known as the celebrities from “The Help”.

PrettySouthern was privileged to sit down with Tate and Viola, then Kathryn and Octavia, to discuss “The Help”. The first question we got to ask was to director Tate Taylor, a Mississippi native who grew up with Kathryn Stockett. We ask this question in all of our interviews: “How do you define a Southerner for the 21st century?”

“The South is a paradox.” Tate declared. “A family of devout Christians goes to church then afterwards invites everyone over for milk punch.”

“We celebrate everything hard. First it’s the milk punch, then it’s the bourbon…” he laughs. Tate grew up with Kathryn ‘Kitty” Stockett in Mississippi. Both were “raised in the wonderful company of many African Americans” and are quick to dispute any tough questions of race in the film.

“Dimitri worked for our family for 32 years,” Kathryn said. “Holy shit, she knew everything about us but we didn’t really know anything about her.” 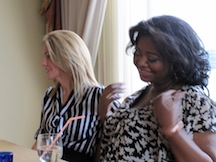 Author Kathryn Stockett and actress Octavia Spencer of "The Help"

“I had a very real relationship with her. She would say ‘Look at yourself. You are so beautiful.” Giving that gift truly signifies an amazing, generous person. “You don’t know much about her life, outside of what she did for your family. How could we really call her family?”

“You can’t be fearful (of racism),” Tate said, as he recounted a story of a woman who had seen the movie then claimed she wouldn’t bring her 10-year old because she didn’t want her child to be exposed to the n-word.

Thanks to one of our readers Katie Cooper for her question: “Did Hilly ever learn her lesson and grow up to embrace integration?” Kathryn responded with “No. I think Hilly is going to be fighting that demon her entire life because she is so immersed in her beliefs.”

“I wanted it to be on paper for people to look back on how ridiculous those rules were.” Kathryn declared. 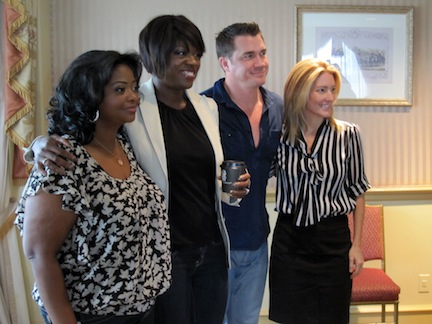 Opening in movie theaters nationwide tomorrow, Wednesday, Aug. 10, “The Help” is a story of gumption, courage and most importantly, love — the kind of loving relationship a soul has with itself and God.

This process with The Help has reinforced that old adage: it’s not what you know, but who you know. Where would the Kathryn Stockett’s of the world be without the Tate Taylor’s to support him? He started working on the screen In almost every way, Tate Taylor is the godfather of The Help. Growing up with Kathryn, living with Octavia, working alongside Viola and the brilliant other actors and crew of this film.

The entire film was shot in 59 days in Greenwood, Miss., beginning in July. Tate joked about Viola sweating bullets, and how in the ending scene between Skeeter and Hilly they had to film it in the shade because it was 108 degrees outside and Bryce Dallas Howard couldn’t be in the sun because she has such fair skin.

Now…let’s turn this conversation to the outstanding Octavia Spencer. Her character, Minny, provides much of the comic relief in the film. She originally met Tate when they were living together in L.A., then met Kathryn one summer in New Orleans. “Y’all were holding court, telling stories about each other.” Kathryn noted. Tate said “I could watch Octavia reading the phone book.”

“I felt pressure on making sure a) Kathryn’s source material was perfect and that Tate was happy plus b) an homage to the men and women whose backs built this country. We find out there’s not a superiority or an inferiority but an equality.”

Octavia called Minny a “dichotomy” as she shows her brave face to the world, and for her children, but she’s really the victim of domestic violence.

“The world is my oyster and I’m putting a pearl inside.” Octavia cheered! “The Help” is coming to a theatre near y’all! It’s easily the best film about race relations in the South since “Driving Miss Daisy”. We’ve got our fingers crossed for these folks for numerous Academy Awards!

You can watch part of our interview with Viola Davis and Tate Taylor here! It’ll take a hot minute to upload but the clip totally worth it.

Interview with The Help from Kevin Patrick on Vimeo.