Bow ties are everywhere. Check the logo on the Playboy bunny or an old can of Budweiser, this simple accessory denotes an essence of elevated style. Warren St. John, a writer for the New York Times once wrote “To its devotees the bow tie suggests iconoclasm of an Old World sort, a fusty adherence to a contrarian point of view. The bow tie hints at intellectualism, real or feigned, and sometimes suggests technical acumen, perhaps because it is so hard to tie. Bow ties are worn by magicians, country doctors, lawyers and professors and by people hoping to look like the above. But perhaps most of all, wearing a bow tie is a way of broadcasting an aggressive lack of concern for what other people think.”

In honor of High Cotton Ties 2011 Fall line, Pretty Southern presents to you Bow Tie History 101. The next time someone asks you gentlemen “Why do you wear a bow tie?” y’all can reply with the following historical lesson. Bow Ties were originally worn by French aristocrats and called “cravats”. This fashion flourished in the 1800s around the time France was investing in the newly formed United States of America. 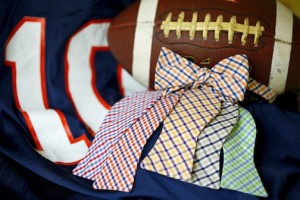 Wealthy gents in Charleston and New Orleans quickly adopted this style to show they were just as intelligent as their French business partners. Plus they looked damn fine. High Cotton Ties has taken this style and colors fit for every collegiate occasion. North Carolina has got shades of blue for Duke, UNC and that other state school. Georgia Dawgs there are multiple bright red ties in different patterns so you won’t have to wear the same bow tie to every game (unless its a good luck charms). High Cotton ties has a bow tie for every school in the South. Check them out here and be sure to follow them on Twitter and Facebook.