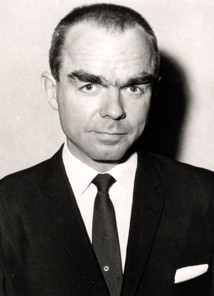 In Greek, nostalgia means pain from an old wound. When I got the call from Marianna Hediera, the current News Editor of The Red & Black, to inform me Professor Conrad Fink passed away, all those feelings of loss and wanting to go back to the good ole glory days of college returned along with a flood of grief.

Mr. Fink was the best teacher. Although he was not a tall man it was sometimes tough for me to look him in the eye because he turned my stomach to mush. He was the most remarkable professor of journalism the South has ever known. News of his passing spread as all good stories do in the age of new media. It was on Twitter, Facebook and RSS Feeds. His death even made The Associated Press wire.

Mr. Fink moved on to the newsroom in the great beyond on at the age of 80. His legacy as a refined ambassador, a true journalist, and a mentor to aspiring writers will last forever. He was a character, even without his trademark eyebrows, as Mr. Fink always wore a coat, tie and slacks for every class. The only time I remember seeing him dressed down was at a University of Georgia tailgate and he still carried an impressive aura.

To sit at Mr. Fink’s table in one of his classes was a real honor. This was a man who recorded the Vietnam War and the Kumari of Kathmandu then later wrote financial reports from an office in London and finally served as a vice president of the Associated Press. He would begin teaching late in life. For a man to give up that kind of powerful position to teach the “rascals” of the world who wanted to be writers is pretty special. He described it as “perfect teaching environment” he created with his students seated around a large mahogany table in the William J. Holland Conference Room. 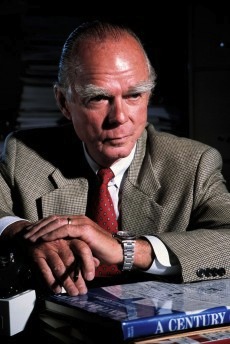 “There is conversational back-and-forth that stimulates discussion and creates camaraderie,” Mr. Fink said.

I’ll never forget our first conversation. I was standing in the hallway of the Grady College of Journalism & Mass Communication giving some prospective students a tour of the school. That day’s edition of The Red & Black featured one of my “Sex in the Classic City” columns. I was a junior at UGA, a news staff reporter for The Red & Black, and just starting to find my voice in the world of opinion editorials. This particular column listed the top 10 reasons to wear a condom. The legend of Mr. Fink and his reputation was enough to make me nervous when I saw him coming down the hall in my direction.

“Morgan, you rascal,” he said. “Your column was really something today. Do your parents know what you’re up to?”

For a second an immense fear took hold of me. In my three years at UGA, I had yet to receive an audience with the renowned Mr. Fink. And here he was interested in my sex-ed column! After a deep breath I finally replied. “My parents are proud of me, sir.”

His unforgettable laugh erupted. “Very well then,” he declared, sauntering across the hall to command his next class.

The next time I saw Mr. Fink was later that spring. We were at an award’s banquet for the Society of Professional Journalists where I received the Mark of Excellence Award for Column Writing. It was the first major recognition I’d gotten for my editorials. Mr. Fink was sitting one table over, and I remember him smiling at me from underneath those bushy white eyebrows. At the end of the reception, he came up to me with another older gentleman, who he introduced as the editor of a newspaper. I wish I could remember which one. I only remember Fink talking to me.

Fast forward through the summer and there I was sitting in Professor Fink’s classroom. I had just assumed my new role as Opinions Editor of The Red & Black and for my first Fink class I chose a seat further down the table. He entered the room and said to me, “Morgan, get over here and sit next to me.” I would sit in the same chair to his left for my entire senior year.

Mr. Fink was king of the one-liner. He always loved good writing that packed an instant punch. It was part of the reason he was so keen on our pal PT Umphress. One of the best jokes between these guys was when Fink said he used to be a knife fighter in Bangkok. I wish I was witty enough to remember all of Fink’s great comments. I hope one of God’s angels is a journalist keeping good notes. At least he has one now with Mr. Fink.

On the horrid afternoon when news broke of the shootings at Virginia Tech I was conveniently heading to one of Fink’s classes. Fellow Red & Black Editor, Juanita Cousins, was serving as News Editor at the time. We approached Fink with the simple question: how do we tell this story?

“Here’s what you do,” Fink said in his cool, collected tone. “You run a story from the wire with the most up-to-date information you have in time to go to press, then below the fold you focus on how this impacts your university.” We took Mr. Fink’s advice back to our Editorial Adviser, Ed Morales, and I remember his face lighting up and saying, “You know, he’s right.” We did just as Mr. Fink instructed and the next morning the front page of The Red & Black looked just as good as The Atlanta Journal-Constitution and better than The Athens Banner-Herald.

Professor Fink taught me to keep track of the week’s stories by ripping off the front news pages every day and taping them to my wall. Monday through Friday’s editions would hang in my office as a reminder of everything we’d accomplished in five days. Butterflies flapped hard in my stomach before going into his class, wondering if our coverage would be good enough, capturing the right tone with our institutional opinions from the Editorial Board, and conveying the University’s news without bias. Thank God I was on his good side.

More often then not, Mr. Fink would end his classes by citing a list of students he wanted to see after. I almost peed my jeans every time my maiden name left his lips. But that was just me being a pansy.

One time, it was because Mr. Fink had selected me to attend a Leading the Newsroom 24/7 conference at the American Press Institute in Washington, D.C. It was on this trip I got to see the USA Today newsroom in McLean, Va., and visit with the online editor of WashingtonPost.com. That was almost five years ago when I was Editor in Chief of The Red & Black.

Right before graduating, Mr. Fink pulled myself and Mr. Umphress aside to inform us we both would received scholarships. Every year, Grady picks two seniors, one young lady and a gentleman, to receive the Lewis Grizzard grant for journalistic achievement. The only condition was we had to write a thank you note to the widow of Mr. Grizzard. I didn’t realize at the time Professor Fink pretty much chose us for this honor. Since then I’ve been a raving fan of the late Grizzard and forever thankful to Mr. Fink for the recognition.

It seems like along with traditional journalism the great columnists are on their way out too. Grizzard is gone, Ernie Pyle is long dead, and now Mr. Fink is with them. As the world continues to spin rapidly in the digital direction we have to remember the virtues great men like Mr. Fink taught us: a good journalist latches onto a story and never lets go, that we have too much power to have bias, and your family always comes first.

Now that I’ve gotten all nostalgic, it’s time to move forward to the future. Losing Mr. Fink reminded me there are so many great tales to tell and adventures to discover. It’s great to know he’s looking down on us, peering over his spectacles, red pen in hand waiting to edit the stories of our lives. In ancient Greece, writers wrote about their heroes in epics so they would forever be immortalized. I like to think Professor Fink did the same.