On Saturday, Feb. 24, around 2:30 to 4 p.m. John Travolta dined at Flip Burger Boutique in Atlanta’s hip Buckhead neighborhood. Mr. Travolta entered the dining room wearing jeans, a dark shirt, black jacket and black baseball cap. At first he was unrecognizable due to the facial hair he was sporting (perhaps for his new movie “Killing Season” he’s filming with Robert DeNiro here in Georgia). His most recognizable feature was his stunning blue eyes. He made eye contact with a group of pretty 20-somethings having a late lunch. But he had his own entourage of ladies also clad in dark clothing. Though it was hard to tell what Mr. Travolta selected for his entree a bottle of SMART Water was brought to the table during the meal. 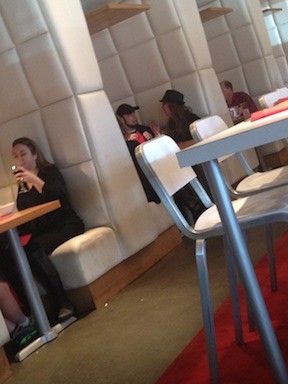 Photo captured by a fellow diner at Flip Burger Boutique