Lily May Peel was born in Atlanta shortly following the Civil War in 1876. This woman had Southern gumption in her veins, as she would be one of the 700 survivors of The Titanic. Miss Peel met Jacques Futrelle, a native Georgian from Pike County, when they were both teenagers and aspiring writers. Jacques was working to make name for himself at The Atlanta Journal then cut his journalism chops reporting for The Boston Post. Alas, he missed Lily May and moved back home to the South. The couple married on July 17, 1895, in Lily’s parents’ Atlanta home on Hilliard Street. They were both 20. Jacques went back to work at The Atlanta Journal to start the newspaper’s first sports desk. After much success, the couple headed north together where Jacques wrote for The New York Herald. He also had a penchant for plays and short stories.

Lily May and Jacques built a house together in Scituate, Mass., which they affectionately called “Stepping Stones”. The couple lived a happy life with their two children, Virginia and Jacques, Jr. a.k.a. John. In the early 1900s Jacques, Sr. took on a position writing for The Boston American while penning fictional stories in his spare time. He created the concept of The Thinking Machine which became a 42-part series published from 1905 to 1912. Lily May also made a name for herself writing articles for magazines and even a few novels. Her most notable work The Secretary of Frivolous Affairs remained on the best-seller for six years. 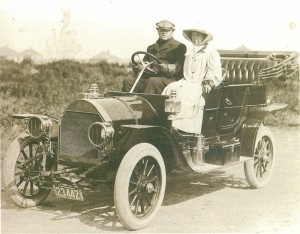 Jacques and Lily May Futrelle in one of the only photos the couple took together.

In early 1912, Lily May and Jacques traveled to Europe where they were both well-received by society. Virginia and John were 16 and 14, respectively, when their parents went overseas. The children were left home in Massachusetts. Jacques celebrated his last birthday at a party in London the night before The Titanic sailed. He was 37 years old, Lily May was 36, and the couple stayed up all night partying. Instead of sleeping, they packed up their baggage and headed for South Hampton. It’s believed they took either the 9:30 a.m. or (most likely) the 11:30 a.m. train which contained other First Class passengers. On board in the ships’ luxurious accommodations, the Futrelles enjoyed the company of other wealthy socialites including the Astors, the Strauss family (founders of Macy’s department stores) and the “Unsinkable” Molly Brown. A lavish dinner party was thrown on The Titanic’s final night to celebrate the success of Commodore Edward J. Smith, The Titanic’s captain who promised his family he’d retire after the maiden voyage of the ship. The Futrelles shared a meal with Broadway producer Henry Harris and his wife Renee. After the dinner party ended, Lily May retired to their First Class stateroom and Jacques enjoyed himself in The Smoking Room. When the ship ran against the icebergs, Jacques quickly rushed to their chambers to rouse Lilly May and get them to the lifeboats.

Lily May would publish a two-part feature for The Boston Post on April 21 and 22, 1912, just a week after the tragedy. As the tiny boats were loaded, Lily May staunchly refused to be separated from her husband. She wrote, Jacques shouted “For God’s sake go. It’s your last chance, go!” as one of them had to survive for the sake of their children. A crew member would force her into the lifeboat, which was only filled with 14 people and had room for 65. “I didn’t want to leave Jacques,” she wrote. “But he assured me there would be enough boats for all and that he would be rescued later.”

The last time Lily May saw Jacques was sitting on a bench smoking a cigarette with John Jacob Astor looking out over the Atlantic facing their icy inevitability. 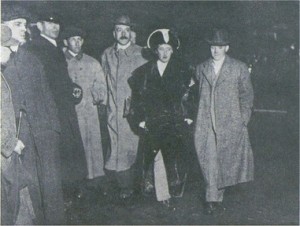 Lily May Peel Futrelle coming off The Carpathia

If Jacques had not perished on The Titanic he would have been one of the most formidable Southern writers in American literature, if not the world. Lily May continued to live out her days at Stepping Stones. Every year on April 14, the anniversary of her husband’s death, she would toss a bouquet of flowers into the Atlantic Ocean. Lily May lived to be 91 and is buried in an unmarked grave.

Editor’s note we would like to thank the following source’s for helping us tell the story of how a Southern girl survived The Titanic: http://www.allatsea.co.za/futrelle.htm; http://www.encyclopedia-titanica.org/titanic-survivor/lily-may-futrelle.html; http://en.wikipedia.org/wiki/Jacques_Futrelle