The gang from Southfork returns on Wednesdays this summer. And Lord have mercy, Dallas has never been hotter. Beginning June 13, the drama continues with the Ewing clan as Linda Gray, Patrick Duffy and Larry Hagman reprise their roles as Sue Ellen, JR and Bobby. This time, their progeny are mixed up in the family’s oil business including a very grown up John Ross Jr., played by Josh Henderson, and the ever-steamy Jessee Metcalfe (re: the hot lawn boy who got it on with Eva Longoria’s Desperate Housewife) is Christopher, Bobby’s adopted son. 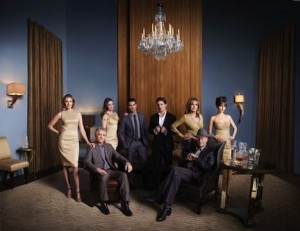 Also joining the cast is Jordana Brewster from Fast & The Furious notoriety as John Ross Jr.’s girlfriend and Christopher’s former fiancée. The plot thickens during the pilot episode when Christopher’s current fiancée, Rebecca (Julie Gonzalo) shows up for her wedding at South Fork. Another Desperate Housewife is in the new ensemble, with the cool, collected Brenda Strong as Ann, Bobby’s wife.

We can’t tell y’all any more of the plot, but as we know from the original Dallas “Blood may be thicker than water, but oil is thicker than both.” And when oil is involved, things are going to get dirty. For more information, check out the show’s web site or follow Dallas on Twitter. We’ll be keeping up with all the episodes this season here on PrettySouthern.com.