I glance down the alleyway to see seven or eight pirates striding towards me then hurry across the street where I am surrounded by Storm Troopers, aliens and zombies. But don’t worry ya’ll, I’m at DragonCon: one of the world’s largest science fiction & fantasy conventions.

Over Labor Day weekend, the Con celebrated its 26th anniversary in Atlanta with a crowd of more than 50,000 folks.
From the Saturday morning parade where thousands of costumed fans strut their stuff down Peachtree, to the jam-packed panel of Star Trek Next Generation actors, DragonCon is a feast for the senses. Costumes range from the insane to the sublime.

There are myriad Batmen, Wonder Women, Supermen, Box People, Spocks and Jokers. The place is crawling with real-life scientists, writers, artists and even an astronaut who recounts his time aboard the International Space Station.

The growing popularity of Steampunk has created a whole new genre, evidenced by Victorian inspired dresses and bustiers, as well as numerous steam-powered vehicles and ornate time machines. Some of the gadgets and props are wondrous. For Doctor Who fans, there’s even a robotic Dalek which threatens to “exterminate” me!

A self-professed foodie, actress Jewel Staite raved about meals at Atlanta restaurants Woodfire Grill and Rathbun’s. Although she didn’t get a chance to post during her stay, you can check out her quirky food and lifestyle blog, Happy Opu. Staite is best-known as
aircraft mechanic Kaylee in the popular space western “Firefly,” and the blockbuster movie Serenity based on the series. 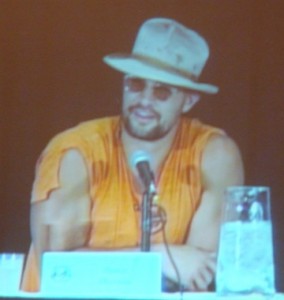 Jason Momoa, most recently seen as primitive horse-lord Khal Drogo in the HBO series “Game of Thrones,” showed up in a torn orange t-shirt. Well, what remained of a t-shirt. The shredded garment exposed his ripped body and had adoring fans swooning. Honey, I was wishing that women still carried smelling salts! During his Q&A session he savored a “local beer,” which looked suspiciously like Sweetwater’s Blue. Y’all can see more photos of crazy costumes here.

Although sci-fi fans travel to the annual con to escape into another world, they also seem to appreciate our southern hospitality. While standing in line, shopping or eating, I heard people remark on the friendliness of Atlantans. On Labor Day, we said goodbye to our costumed companions then headed back to our work-a-day world as teachers, bankers, dental assistants, students, techies, and PR professionals to dream about the adventures we’ll have at next year’s DragonCon.