Pretty Southern will feature Pigskin Peaches as it’s recurring sports column during football season written by our very own pretty Southern girl: Katy Ruth Camp. Now why is Miss Camp the best authority to report on such an important subject, nay religion? “My dad was a University of Georgia football lettermen and spent over 30 years coaching high school recruits while my brother played the game his whole life until an injury sidelined him at UGA. My mother was the best bleachers cheerleader there ever was. (And the most stylish, too.) Some of my earliest memories are of sitting on a fold-out picnic table parked on the lawn of Park Hall in Athens, Ga., eating The Varsity with my cousins while Mom put a ‘Georgia G’ on my cheek. When I entered adulthood, Saturdays in the fall often meant donning the perfect game day outfit and filling my plastic mug with whiskey and coke at 10 a.m. After college, I hosted a local media outlet’s high school football show for three seasons and won first place from the Georgia Sports Writers Association for football reporting. I graduated from UGA with degrees in literature and journalism, where I also worked as a writer and game day assistant for the UGA Athletic Association. I’ll always woof on the Dawgs but, first and foremost, I’m a fan of the South’s football dominance, so I will try my best to check my bias at the door.”

Check out her first column of 2013 here, plus read her take from 2012 season when Missouri and Texas A & M joined the Southeastern Conference. We’re sure glad she’s on our team.

Welcome to the SEC, boys. This Saturday will mark a new era when the Missouri Tigers and Texas A & M Aggies get their first taste of SEC football as members of the nation’s top conference. Hey – six national championships in a row don’t lie. This is no cupcake beginning, though: Missouri will face a powerful, No. 6-ranked Georgia while the Aggies will square off against the the No. 24 Florida Gators, who struggled last year but can still tout a long list of national accomplishments. Both of the SEC anchors will be traveling to the new kids on the block’s stadiums, so the Aggies and Tigers can take some comfort in playing on their home fields.

Texas A&M was the first to hop on the SEC bandwagon this year. Their entrance marked the first addition to the conference since South Carolina and Arkansas joined in 1991, over 20 years ago. Missouri finalized its deal on July 1.

As we all know, playing in the SEC is a marathon, not a sprint. A non-SEC team can often hang in a single game against the boys from the South and sometimes even provide a downright beating (see the Georgia-Boise State mess last year). But when you’re playing an SEC schedule all year, it’s a whole other ballgame. Many teams play only one or two tough games a year then enjoy the spoils of playing against mediocre or even just plain bad teams for the rest of the year. But if you go from that to playing back-to-back SEC teams every week (Tennessee then Georgia then Florida then South Carolina, or Alabama then Auburn then LSU then Arkansas) you’re going to have a whole lot of aching bones on Sunday. Heck, even the worst teams in the SEC can hold their own, leaving no one playing an SEC schedule time to breathe.

Personally, I think Texas A&M and Missouri will do well in the SEC and I’m glad they joined. But you know from watching any reality competition show that the newbies are usually bullied then eventually worn down by the veteran players unless they just outright beat the vets, over and over. Georgia and Florida will both have their hands full this weekend, no doubt. But I’ll hold off on judging the Tigers and Aggies until January, no matter what happens on Saturday.

The two new teams haven’t played an SEC opponent yet this year, but that hasn’t stopped them from talking smack. Missouri defensive tackle Sheldon Richardson got his name in ink on Sunday after he made this comment about Georgia:

“I watched the game. I turned it off, too…It’s like watching Big Ten football. It’s old-man football…If we execute, nobody in this league can touch us. Period.”

Georgia Head Coach Mark Richt had this to say about Richardson’s comments:

“’Old-man football?’ Well, I don’t know what he meant by that. But bottom line is, we got to get after it and do what we do well, and they’ll be trying to stop everything we’re trying to get accomplished…It’s a huge game for them, no doubt. It’s a huge game for us, too, though, because we’ve got our goals. And they’ve got their goals.  Shoot, to me, it’s the biggest game of the year, no doubt. … It’s a monster game.”

And you’ll see that the Aggies posted this billboard in Gainesville for a day to rile up the Aggie nation (and undoubtedly piss off the Gator nation). 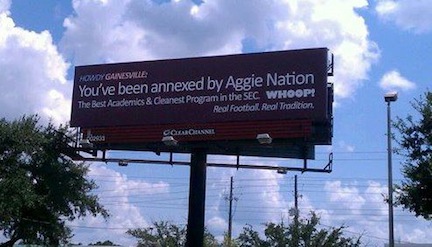 I guess building swagger before a big season is better than coming in with your tail tucked between your legs, and I actually think all of the preseason trash talk has been pretty funny. Stuff like that gets both teams fired up. But who will be laughing in the end?

[author] [author_image timthumb=’on’]http://prettysouthern.com/wp-content/uploads/2012/09/mug-shot-1.jpg[/author_image] [author_info]Kay Ruth Camp is a professional writer living in Smyrna, Ga. Katy Ruth grew up in a small town in north Georgia and graduated from the University of Georgia with degrees in journalism and literature. During college, she worked as a writer and game day assistant for the UGA Athletic Association. After college, she hosted a local media outlet’s high school football show for three seasons and won first place from the Georgia Sports Writers Association for football reporting. Her father, John Camp, was a UGA football letterman and high school football coach in Georgia for over 30 years. Read more on Pigskin Peaches blog, like them on Facebook, follow on Twitter, and check back weekly on PrettySouthern.com.[/author_info] [/author]

One Response to “Pigskin Peaches”