“Gone With The Wind” was 1,037 pages which took its author, Margaret Mitchell a decade to write. Then it took 517 pages to correctly document the life and times of this great Southern writer and the romance between Mitchell and her husband, John Marsh.

In “Margaret Mitchell & John Marsh: The Love Story Behind Gone With the Wind,” biographer Marianne Walker researched thousands of papers containing correspondence from the Marsh husband & wife team. Letter to family, friends, business associates, and even fans were unearthed to properly tell the tale of this power couple from their start to an untimely finish. Miss Walker’s effort to research the true history behind the Marshes life together comes to fruition in this biography.

For every writer is only brilliant once someone believes in her talent. Heaven cast Mr. John Robert Marsh of Maysville, Ky., to play the editor, lover, business manager and most devoted husband to Margaret Mitchell. the South has ever known. The reader becomes enamored with the fascinating tale which began in Atlanta during Prohibition times. It’s thought the first time John Marsh lay eyes on Margaret “Peggy” Mitchell in a speakeasy he instantly became enamored with her. 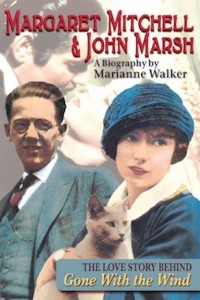 Then she strung him along while dating many other men and eventually ended up marrying his roommate, Red Upshaw. But it was an ill-fated marriage, as Peggy was truly meant to be with John. He was by her side throughout her tumultuous early 20s and gave Peggy her typewriter which would berth her famous work. On that day, he said to her “Madam…I greet you on the beginning of a great new career.”

“Gone With The Wind” sold more than 30 million copies, which makes Margaret Mitchell not only the greatest writer the South has ever known, but also one of the most popular authors in the world. And with such great popularity comes equal responsibility. After giving birth to their labor of love, the Marshes took on the burden of maintaining the copyrights in more than 20 countries because at the time the publisher refused to do so. The Marshes were pioneers in the foreign copyright industry right out of their own apartment in Atlanta. And Walker does a fantastic job of touting all their trials and tribulations. Because above all, John and Peggy’s love for one another never faltered. Publisher’s Weekly calls Margaret Mitchell & John Marsh: The Love Story Behind Gone With the Wind “… a moving love story of symbiotic union that lasted 24 years.  A remarkable piece of detective work.”

The last lines of the book have the most profound impact and will bring tears to the end of this biography. “He was there, with calm judgement, quiet admiration, whole souled devotion.” The love John Marsh had for his wife could not be summed up any better.

More information about the biography can be found here. Have any of y’all read this powerful work? If so, please let us know your thoughts in a comment below.