The South has turned into a modern entertainment mecca. Television shows such as Hart of Dixie, Nashville, True Blood, and yes, even Honey Boo Boo herself have drawn the eyes of the world to focus on Southern women in a new light. As it’s the mission of Pretty Southern to question what it means to be Southerner in the 21st century, we’re always on the lookout for the next emerging trend in our culture South of the Mason Dixon line. Now, there’s an even bigger movement (started by a Southern lady) rocking on the West Coast. Pretty Southern was privileged to interview Julia Fowler – writer, actor and director of the viral video sensation Sh%t Southern Women Say. Since Fowler posted her video on Oct. 31, 2012, it’s garnered 2.7 MILLION hits! That’s an average of more than 500,000 hits each week since the Southern Women Channel launched on YouTube. Here are our questions Miss Julia was kind enough to answer:

Where are you originally from? Gaffney, South Carolina

Why did you pick U. of South Carolina for school? Why’d you choose to rush and pledge Chi Omega?

I received an academic scholarship from USC  and really enjoyed my time at the University. Columbia is a lovely city. I wanted to rush because I was an only child from a very small town and was overwhelmed by the size of USC and the city of Columbia. I thought it would be a good way to meet people and do community service. I pledged Chi-O because of the amazing women I met in that sorority. I am still in touch with many of those gals and will forever be grateful for their friendships. 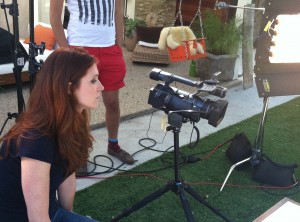 Julia Fowler behind the camera filming her first episode.

How long have you been out in Los Angeles?

I have lived in LA for 12 years. Prior to LA, I lived in NYC for seven years. I would have never left the South if I had not been pursuing show business. In NYC, I was a Broadway performer. In LA, I work mostly in film and TV.

What’s it like to be living so far from home? What do you miss most about the South?

There are so many things I miss about the South but mostly I miss the spirit of the people. Folks in the South are just plain special. I admire their humor, kindness, passion and thoughtfulness. The women are strong yet feminine and the men are strong yet sweet. I miss my Mama and Daddy, my best girlfriends, sweet tea, good fried chicken, the sounds of all the bugs at night…all those beautiful trees. And Cracker Barrel. I love Cracker Barrel.

Are there any “Southern Comforts” you’ve found on the West Coast?

My West Coast “Southern Comforts” include making my Granny Fowler’s  famous pecan pie, although it never tastes as good as hers. And my best friends who are in the video, Sheila Hawkins, Delaine Yates, and Katherine Bailess…all fabulous Southern belles living in LA.

How’d you come up with the concept for the video? I have been writing for the last few years and always from a Southern perspective. After watching a video that was sent to me, “Shit People in LA Say” I was inspired to write one for Southern women. I did it simply for fun.

How long did it take you to write the script? I wrote it in two days but I had no idea if anyone would think it was funny. My husband was out of town so I asked my friend, Sheila Hawkins, to come over. I read it to her and she cried she laughed so hard. I knew then I had to actually shoot it. I then called my other girlfriends and told them I had written something with each of them in mind. I was very particular about which gal said which line because they all have distinct personalities and Southern backgrounds. 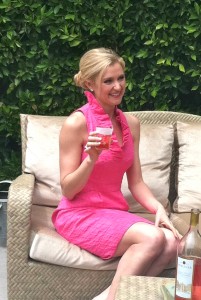 Where was the video filmed? I filmed it all in LA.  We had ZERO budget so I begged friends to let me shoot at their houses or apartments. The restaurant is Hostaria Piccolo, the owner is a friend of mine. He was very generous and kind to let me shoot there.

Who was responsible for the camera? What equipment did you use? We used an HD digital camera. My husband and I took turns shooting. We also used four local film school students to help us with all areas of the production.

How do you know Katherine Bailess, Sheila Hawkins and Delaine Yates?
Katherine is an actress, singer and dancer from Mississippi. I met her at Bodyline Pilates studio in Beverly Hills. I have been teaching Pilates for 6 years. Kat came through our teacher training program and I fell in love with her immediately. She is sort of like my little sister. Kat has a show coming out on VH1 next year called “Bounce.”  She is going to be terrific in the show.

Delaine Yates is from New Orleans. I met her in acting class several years ago in LA and she is one of my very best friends. We bonded of course because we are both Southern.

Sheila Hawkins is from Spartanburg, S.C.  I have known her since I was 12 years old.  She was a hair stylist who did me and my Mama’s hair forever. Sheila came to LA to be a bridesmaid in my wedding. She fell in love with California and decided she needed a life change so she moved out here. Sheila now works as a coordinating producer in television. She has never acted before or had any acting classes. I made her do the video because she is so authentic and proud of her accent. Sheila is like a big sister to me. I love all these gals and sometimes when we’re all together I forget I’m not in the South!

The line, “She didn’t use Duke’s mayonnaise.” is perfection. What’s your favorite Duke’s recipe? Glad you like that line. Everyone told me it was not that funny but I insisted on using it. So glad I went with my gut because the response has been great. I like Duke’s mayo on my tomato sandwiches and you simply cannot make potato salad without it! 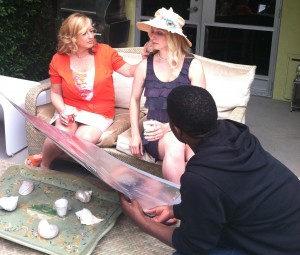 How many takes did y’all need for each line? What were some of the trickiest ones? I did several takes of each line because I was exploring the tone. I wasn’t exactly sure what I would need in the edit so I overshot to be safe. Truthfully they were all tricky because it is extremely hard to truthfully deliver one liners. It’s one of the toughest things you can ask of an actor.

What are your favorite moments from your video? “Dern, Damn, Shiiit”. “He’s a goober.” The church segment and “you don’t need another boat.”

What’s the reaction been like from your friends & family back home? What have your L.A. pals had to say? I was stunned by the reaction. I never dreamed this little video would go viral. People have loved it from all over the country as well as internationally. I am most proud that Southern folks overall seem to understand that I am laughing with them and not at them. I did it as a love letter to the South. Every script I have ever written has been a love letter to the South. I am very proud to be Southern and make no effort to cover or change my accent unless it is required for an acting job.  People in NY and LA give me a hard time about my accent…but they all got a real kick out of watching me work in my native tongue.

Are there plans for more videos? Episode 2 is now live (scroll down below to see it) although, I lay awake at night worried folks won’t like it as much as the first one. Sequels are always tough. I am also beginning to formulate new ideas for the Southern Women’s channel.  In addition, I have a Southern screenplay I am trying to get made. It was originally optioned by New Line Cinema but they decided not to make it so we are now looking for indie financing.

Editor’s Note, check out Episode 1 of Sh%t Southern Women Say here. Play Episode 2 below and let us know what your favorite moments in the Comments section!