Here’s to…well…365 days of anything goes. Perhaps all of America can agree: 2012 was a year of uncertainty. What would happen if the Republicans win the Presidency? How bad will the economy plummet if President Obama is re-elected? Why did Miley do that to her hair? And who is this Skrillex and how does his so-called music win awards?

Thank you, Jesus, the world did not end! We as a nation have a renewed sense of hope for the coming year. The country isn’t going to plummet off some fiscal cliff (at least not tonight) so we can all go out and party. Although 2012 was filled with its trials, we were privileged to attend a lot of neat events celebrating the simple art of having fun. For those who are ready to say “buh-bye” to this crazy year, these are our Top 12 moments of 2012.

1. This spring, Zoo Atlanta opened its own behind-the-scenes tour appropriately named Wild Encounters where guests have the rare opportunity to pet an elephant, outstretch lettuce leaves to giraffes, and even feed a Komodo dragon 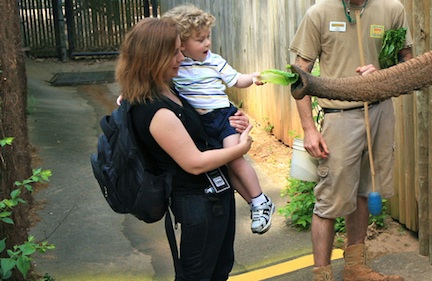 This little gent was thrilled to check out an elephant up close.

2. Taste of Atlanta rocked the palettes of thousands of foodies from near-and-far for its 11th year in a row. For three days full of culinary delights, chefs from the city’s premier restaurants brought their A-game to citizens of the A-town. Our favorite part of the long-food-coma-of-a weekend was The Big Grill kick off on Friday night. Which brings us into more foodie fun with… 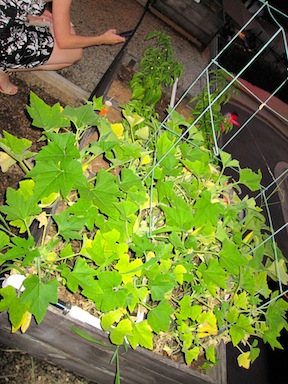 3. Ecco – a lovely establishment – got the gumption to build its own rooftop garden in the heart of Midtown Atlanta. They recently installed eight new cedar beds with “cold frame” structures on the roof allowing a larger variety of produce to be grown…even in the winter time. All year-round, this restaurant celebrates the art of Italian cuisine while adding in its own unique Southern flavor. Whether it was locally grown squash blossoms (picked fresh then fried to perfection), homemade pastas prepared daily, or using herbs grown on their own roof, Ecco was truly a Garden of Eatin’.

4. Czar Ice Bar opened its doors to quickly become the coolest hot spot in the Buckhead Bar Triangle. With more than 300 different house-infused vodkas (even Krispy Kreme donuts and Skittle flavors) and the tastiest sushi this side of the Mason Dixon line from renowned Master Sushi Chef Saito Saito. His newest seafood creation is the Mango Roll with shrimp tempura and crab, flash fried then topped with fresh mango and drizzled with a sweet and sour sauce…yum! 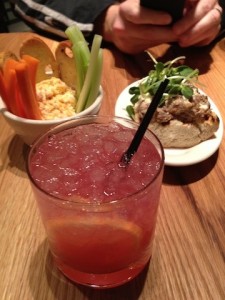 5. Bantam + Biddy opened its doors for breakfast, lunch and dinner in Midtown. Chef Shaun Doty (of Shaun’s and Yeah Burger) and his partner Lance Gummere (formerly of The Shed @ Glenwood) presented Atlantans with a new fast-casual concept featuring locally pastured and all-natural poultry plus tons of other fresh Southern flavors. And they’re open tomorrow for New Year’s Day. A Bee’s Knees cocktail (featured left) is sure to kill that post NYE hangover along with a generous helping of pimento cheese and savory chicken livers on toasted French baguette.

Special thanks also goes to Melissa Libby PR (especially Miss Mandy Betts!), The Rosen Group, and Eskimo Advertising for the opportunity to feature these incredible restaurants. We look forward to future collaboration in 2013.

6.. While we’re fat and happy after eating our way through 2012, we also discovered even more amazing local businesses along the way. A few of our favorites were the 20-something Carolina gents handcrafting their own pens, the Mississippi Gift Company shipping Southern sweet treats ’round the nation, Cathead Vodka’s amazing honeysuckle libation, and of course The Rowdy Gentleman was there to provide “polite” party gear. 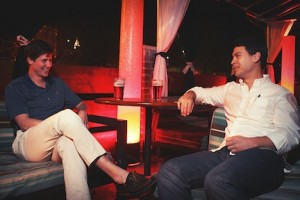 7. Pretty Southern gained a bevvy of new contributors including Jennifer Eubanks – who covered the Southeastern Soup Challenge with Souper Jenny herself plus enjoyed the delicious flavors of Alpine Bakery & Trattoria – and rising journalism star Adam Carlson who sat down with Linda Gray and Josh Henderson to discuss their remake of DALLAS. We also enjoyed the work of Karen Hatchett who braved the masses of DragonCon, watched the Margaret Mitchell Square gain a new monument, and helped promote the Atlanta Jazz Festival then shared her lovely stories with Pretty Southern.

8. For those who don’t know, Google has an office in Midtown Atlanta, and the folks there set up some cool Hangouts this year. Because of their innovation, Pretty Southern was privileged to interview Stephen Chbosky, the writer and director of “The Perks of Being a Wallflower”. We connected with the New York Public Library (who hosted the event with Google) and were reminded of the fantastic line “We accept the love we think we deserve.” Remember that for 2013, folks.

9. Also in literary news, Pretty Southern was attend our first book party! A reception in honor of Atlanta-based author Emily Giffin was hosted at The W Atlanta – Buckhead to celebrate her new book Where We Belong. The party featured cocktails from new local-favorite Vixen vodka and special thanks to Allied Public Relations for including Pretty Southern on the guest list for all their fabulous events in 2012.

10. In sad news, we can’t move on from 2012 without saying goodbye one last time. Journalists around the world lost a mentor in Professor Conrad Fink. For those students who were privileged to sit at his long conference table in the hallowed halls of The Grady College at UGA, we lost out favorite teacher. Fink’s legacy spans more than 60 years as a writer, and three decades of teaching the “rascals” of the world how to piece together a decent story.

11. We also have to mention The Red & Black walkout. As Polina Marinova (Editor of UGA’s newspaper) contributed to Pretty Southern this summer, we were shocked the evening of Aug. 15 when we read on our collective Facebook news feed that the editorial staff walked out. That’s the simple power of social media folks. Marinova had the gumption to call foul when she was informed she would no longer maintain the final editorial control of her student newspaper. She and her team of student staff writers took to the Web to let their voices be heard and they set off a media firestorm. Less than a week later, Marinova was back in her well-deserved office. Plus The Red & Black took home several Pacemaker awards (the top prizes for collegiate journalism). 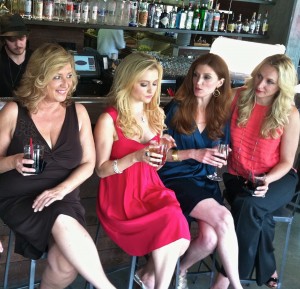 12. And finally, to round out our expression of First Amendment Right to Freedom of Speech, Sh%t Southern Women Say went viral on the Web with 3 MILLION hits! Julia Fowler and her posse of pretty Southern ladies on the West Coast recorded the best one-liners ever uttered with such a sweet drawl. They even posted Round 2 for your enjoyment. We hope to see more from the Southern Women Channel in 2013.

There’s something folks out there love about our unique vocabulary in the South. Words Only Southerners say has garnered more than 50 comments since we posted it last year. We feel another batch is coming up soon, especially if Lord-willing the Falcons make it to the Super Bowl. Speaking of which, pick up your “I AM ATL” shirts here.

Thank you to all of y’all for reading Pretty Southern this year. We promise even more fun to come in 2013.