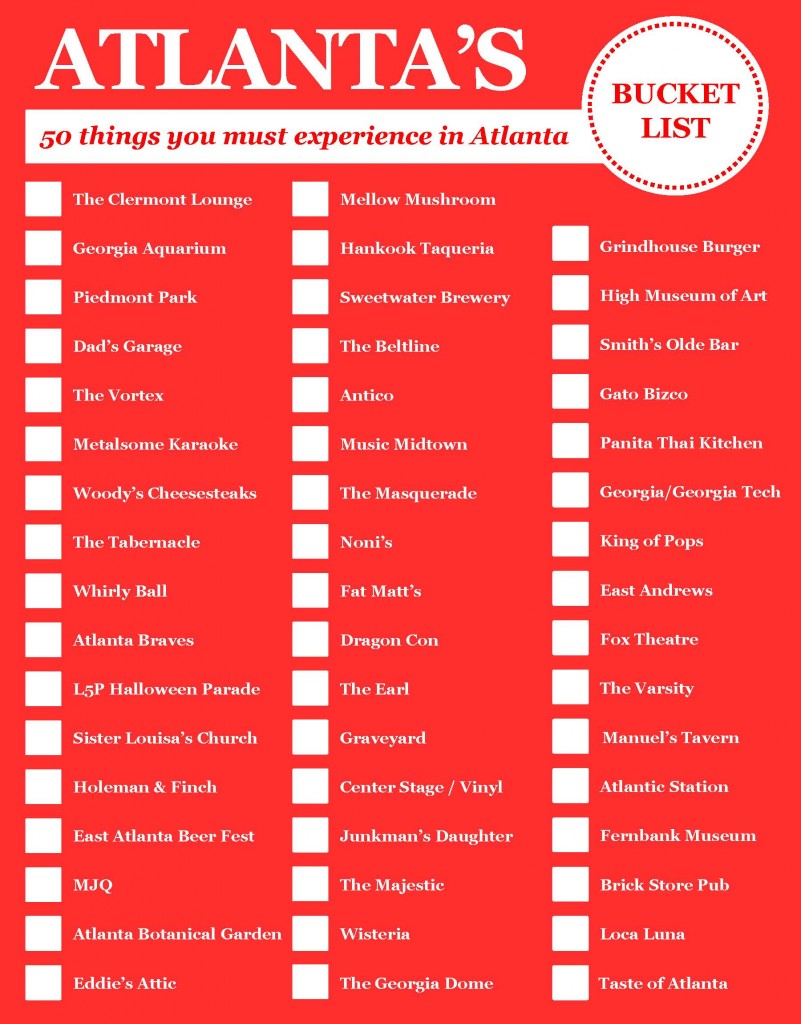 After reading our Atlanta Bucket List, our dear friend (known on Yelp as Ivan S.) contributed his top 100 things to do in Atlanta. You’re gonna need a napkin to wipe your mouth off because this list is extensive! It ranges from the heart of downtown to way outside the perimeter (or OTP for y’all who know what that means). Good luck to anyone who dares to work your way through these 100 places. We’re certainly going to try through, and document it along the way moving forward. Here we go now with Mr. S’s Atlanta Bucket List.

1. Burger at Miss Ann’s
2. Burger at Holeman & Finch
3. Sing at Church Organ karaoke at Sister Louisa’s
4. Sing karaoke at Mary’s
5. Sing karaoke at the Southern Comfort
6. Stone Mountain Laser Show
7. Fried Chicken at Watershed
8. Sunrise/Sunset on Stone Mountain
9. Find the hidden lake at Davidson-Arabia Park
10. Ride the Ramblin’ Wreck
11. Dress up at DragonCon
12. FurryCon
13. Have a chicken biscuit at the Chik-Fil-a Dwarf House (the one in Hapeville i.e., the first one)
14. Win Manuel’s trivia
15. Win The Local’s Trainwreck Trivia
16. Finish a Scorpion Bowl at Trader Vic’s (by yourself)
17. Attend the Kingsized’s Elvis Extravaganza
18, Be in the Inman Park Parade
19. March in the Pride Parade
20. Ride in the Pink Pig
21. Ice Skate in Centennial Park
22. Take the CNN Tour (and continually ask to see Robin Meade)
23. Attend/tailgate the SEC football championship
24. AYCE samgyeopsal jip at HoneyPig
25. Buy a bonsai from the monks in Lithonia (yes, there actually is a Buddhist monastery in Georgia)
26. Go to the Waffle House museum
27. Ride MARTA from the airport to North Point station (and back)
28. SantaCon
29. Drink enough to gain entry to the Fred
30. Wear a kilt to the Highlands Festival
31. Pass out at SteepleChase
32. Sneak a flask into the Atlanta Zoo
33. Take anyone of the GA Preservation Society Historic Walking Tours
34. Attend Halloween at the Oakland Park Cemetery
35. Find “Atlanta Marker Zero” near Underground Atlanta
36. Putt a ball in front of Bobby Jones’ house in Grant Park
37. Tell Margret Mitchell’s grave (in Oakland Cemetery) that “Frankly, my dear, I don’t give a damn.”
38. Compete in the Chomp and Stomp
39. Drive a Dodge Charger around the square in Covington
40. Be insulted by Nick at Nick’s-To-Go
41. Stay at MJQ till the turn on the lights
42. Lapdance by Blondie
43. Attend Drive-Invasion at the Starlight
44. Go to a midnight at the High event
45. Dance with your SO under a T.Rex at Martinis at IMAX
46. Take a lap around Atlanta Motor Speedway
47. Go/compete in the Redneck Olympics in Dublin, GA
48. Go/chicken dance at Oktoberfest in Helen, GA
49. Watch a tree give birth to a Cabbage Patch Doll in Dalonhega, GA
50. Go gem grubbing in Dalonhega, GA
51. Nod knowingly at Bicycle Shorts Man
52. Create a graffitto in the Krog Street Tunnel
53. Be challenged for breaking a rule at Your Dekalb’s Farmer’s Market
54. Use Piedmont Park’s Robot Bathroom
55. Shoot the “hooch”
56. Watch the Peach Drop
57. Attend a Rocky Horror Picture Show at the Plaza
58. Visit the Wren’s Nest
59. Get picked on at Dad’s Garage
60. Order dry-fried eggplant at Tasty China
61. Watch a Braves game from the $5 seats
62. Watch a Hawks game
63. Watch a Falcons game
64. Watch a Silverbacks game
65. Watch a 4 a.m. World Cup game at The Brewhouse
66. Compete in an Autocross at Turner Field
67. Run/walk the Peachtree Road Race
68. Take a pic in front of the Atlanta White House
69. Take a pic in front of the Big Chicken
70. Watch the Santaland Diaries at the Horizon Theater
71. Attend the Bronner Brothers International Hair Show
72. Bike the Freedom Trail from Midtown to Stone Mountain
73. Learn origami at JapanFest
74. A first date at Apres Diem
75. Eat an arepa from Arepa Mia
76. Buy something at 4 a.m. from Murder Kroger
77. Find Emory’s president’s house in the Lullwater Conservancy
78. Order a pork hotpot (with crunchy rice) from Chateau Saigon
79. Order a pig ear sandwich from The Big Apple Inn-Atlanta.
80. Get a massage from that lady at Mary Mac’s.
81. Order a beef rib from Fox Bros
82. Order anything from Heirloom Market (and be able to sit down and eat it.)
83. Order a sonoran dog at Bone Garden Cantina
84. Order a haute dog at the Iberian Pig
85. Order a quadruple bypass burger at the Vortex
86. Buy a used book from the Book Nook
87. A night at the Octopus Bar
88. 4am eggs at The Majestic
89. Oysters at the Optimist
90. Attend the Dames Aflame Valentine’s Show with your SO
91. Attend a service at Ebenezzer Baptist
92. Get some chicken at El Norteno
93. Get some chicken at La Brasas
94. Noni’s Dance Party
95. Walk the length of any Atlanta Streets Alive
96. A meal at the Blue Gorilla
97. Lobster roll at Nicky’s
98. Soup buns at Chef Lui’s
99. Pork from Ming’s BBQ
100. Drink all the sodas at the Coke Museum