If y’all haven’t been keeping up with the Southern blogosphere, then you missed the launch of The Bitter Southerner. One such gentleman named Chuck Reece, a writer and editor with more than 30-plus years of penmanship, was fed up with the great stories of the South going undocumented, so he set out to do just that. Every Tuesday from now ’til the Rapture (Lord willing) the Bitter Southerner will bring y’all another great story from the South. Y’all can read his first stellar interviews with Holeman & Finch’s Greg Best and Patterson Hood, frontman for Drive-by Truckers. Here’s what Reece had to say about launching The Bitter Southerner:

This whole thing got started because I got pissed off. Bitter, as it were.

Here’s how it happened. My then-fiancée and I spent a week in New Orleans. We spent time with amazing barkeeps like Chris Hannah at Arnaud’s French 75, Kirk Estopinal at Cure and one of the granddaddies of the American cocktail revival, Chris McMillian at Bar Uncommon. We drank very well. We heard great stories. We learned. 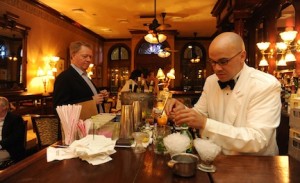 Chris Hannah doing what he does best.

Shortly after we returned, Drinks International released its list of the top 50 bars in the world. Not a single bar in New Orleans — or anywhere in the South — was on the list. I felt a familiar twinge of bitterness. I remembered the first time I moved away from the South, to New York City, and learned that my accent could trigger certain negative assumptions. To my new NYC acquaintances, my twang equaled “dumb” or “backward” or worse. Of course, when people discovered that I was reasonably intelligent and could speak in complete sentences, their assumptions quickly melted away. I learned a lesson: Sometimes, you just gotta show people.

I decided somebody needed to show the world our region’s drinking secrets. So I rounded up a gang of co-conspirators — designers, photographers, videographers, whiskey geeks — with a plan to hunt down the South’s finest barkeeps and ask them to tell their stories. We would give them their due.

Then we started thinking: There’s a larger point here, a bigger story to be told.

It always comes down to that last bit: With all our baggage, how do we live at all? A lot of people in the world believe that a lot of folks in the South are just dumb. Or backward. Just not worth their attention.

And you know what? If you live down here, sometimes you look around and think, “Those folks are right.” We do have people here who will argue, in all sincerity, that the Confederacy entered the Civil War only to defend the concept of states’ rights and that secession had nothing to do with the desire to keep slavery alive. We still become a national laughing stock because some small town somewhere has not figured out how to hold a high school prom that includes kids of all races.

If you are a person who buys the states’ rights argument … or you fly the rebel flag in your front yard … or you still think women look really nice in hoop skirts, we politely suggest you find other amusements on the web. The Bitter Southerner is not for you. 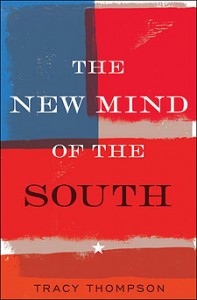 According to Tracy Thompson’s brilliant “The New Mind of the South,” it’s been only two decades since Southern kids (including the entire Bitter Southerner crew) stopped learning history from censored textbooks, which uniformly glossed over our region’s terrible racial history. Even today, kids are studying texts that Thompson rightfully labels “milquetoast” in their treatment of Southern history.

And recent election results suggest that the Southern mind hasn’t evolved much, that we’re not much different from what we were in 1936, when Faulkner was struggling yet again with the moral weirdness of the South. Almost 80 years later, it’s still too damned easy for folks to draw the conclusion that we Southerners are hopelessly bound to tradition, too resistant to change.

But there is another South, the one that we know: a South that is full of people who do things that honor genuinely honorable traditions. Drinking. Cooking. Reading. Writing. Singing. Playing. Making things. It’s also full of people who face our region’s contradictions and are determined to throw our dishonorable traditions out the window. The Bitter Southerner is here for Southern people who do cool things, smart things, things that change the whole world, or just a few minds at a time.

The world knows too little about these people, which is, alas, another reason to be bitter. But it prompted us to create The Bitter Southerner™.

Last time I saw Patterson, we sat in his van outside Eddie’s Attic in Decatur, Ga. We were talking about how his view had changed in the dozen or so years since he’d written that song. 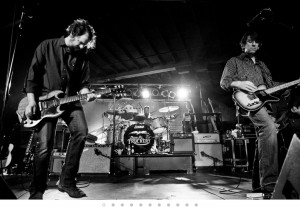 The Drive-By Truckers rockin' out, photo by Stacie Huckeba

To him, the 2012 election results brought clear evidence that we are moving into a more progressive era, and that our southern home might actually be following, however slowly. “We may actually wind up living in a more enlightened country,” he said, and laughed a little.

Still, the tension — the strain between pride and shame, that eternal duality of the Southern thing — remains. Lord knows, most folks outside the South believe — and rightly so — that most Southerners are kicking and screaming to keep the old South old. But many others, through the simple dignity of their work, are changing things.

We’re here to tell their stories. Over time, you’ll see many pieces about bartenders, because a) that’s where we started and b) we very much enjoy a great cocktail. After all, one Southern tradition worthy of honor is the act of drinking well. But we’ll also cover the musicians, cooks, designers, farmers, scientists, innovators, writers, thinkers and craftsmen. We’ll show you the spots that make the South a far better place than most folks think it is. You’ll also see essays, short stories and poems — pieces that Bitter Southerners like ourselves create as we wrestle with our region. And every now and then, we’ll give you a peek at the oddities that seem to happen only down here.

We hope you’ll want to contribute to The Bitter Southerner. In fact, we need you to. Right now, we have no budget and a staff of volunteers, so we’re starting in our hometown of Atlanta. But we know there are others out there like us, people with the skills to capture a good story, or create one. Tell us your ideas. Let us know who you are.

The stories are out there, all over the South. They deserve to be told.

Until we tell them all, we will remain as bitter as Antoine Amedie Peychaud.

The Bitter Southerner offers only this promise: one great story from the South every week. More specifically, every Tuesday.

Why only one story a week? Well, that word “great” is the operative one. We want to make sure that every story you see on The Bitter Southerner’s site gets treated right. Like any good work, that takes some time.

We do promise to keep you entertained between stories. Follow us on Facebook, Twitter @bittersouth and/or Google+. We’ll keep you apprised of praiseworthy and interesting stuff going on in the South, with a little bit of Bitter Southerner interpretation for lagniappe.” 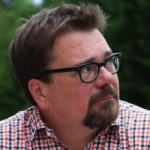 Chuck Reece has been a writer and editor for more than 30 years, beginning in journalism and then moving through politics, corporate communication and the consulting world. He hails from Elijay, Ga., and calls Atlanta home.