So, there’s a little thing kicking off tonight called college football. Are you ready? Lord knows I am.

I just hope my heart is ready, too.

After a night of bluegrass and brews last Friday, I was sitting on the screen porch of my boyfriend Jake’s apartment with his roommate and one of his best friends, who was in town from Charlotte. The air was thick and damp, with the rain tapping on the trees surrounding us and the tunes coming out of Jake’s phone just low enough to let us have a deep, passionate and pensive conversation about most true Southerners’ favorite topic: college football. We talked about everything from Ohio State’s laughable schedule to the SEC to what we expected for our teams this year. 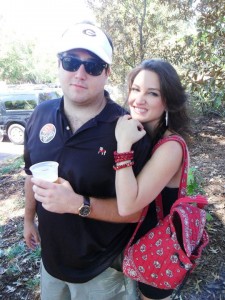 But at one point, as the fellas from Florida State sat back and spoke calmly about their new players and games they would play this season, I felt my blood pressure rising, my heart thumping and that pit in my stomach start to grow into the volleyball-size it felt the morning of Dec. 1, 2012, all over again. Because while they, like anyone else, would love nothing more than to see Jimbo raise that glass football in January, I would argue that there is no group of fans wanting to claim the title “National Champs” more than the Dawgs.

“It truly is the most glorious and the most heartbreaking thing, all in one, to be a Georgia fan,” I told them. Just saying those words made me sigh, and made me sigh again as I wrote them because of the weight of truth that they carry. 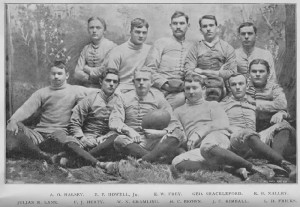 Georgia has been playing football for well over a century, since it took the field in the first game ever played in the Deep South against Mercer University on Jan. 30, 1892. In 121 years of pigskin play, Georgia has won one National Championship, beating Notre Dame in 1980 with the almighty Herschel. (Although, we were given the title of National Champions four more times, dating back to 1927, but the designation was much less decisive and formal than it is now.)

In my 28 years of being a Dawg, I have never seen the Dawgs go “all the way.” My love for everything Athens and UGA has never faltered, but my heart seems to be worn out by the end of every season. Still, there’s no doubt we’ve been damn good Dawgs. We’ve won coveted SEC Championships, BCS bowls, have a chart-topping 46 Dawgs in the NFL right now and pretty much would have killed Notre Lame in the National Championship, too, if it wasn’t for those flippin’ five yards. Damn it’s hard on the heart to be a Dawg. But it’s the best thing in the world to be a Dawg, too. 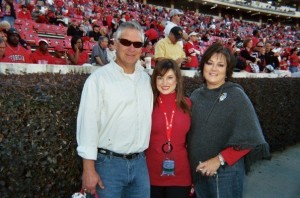 Katy Ruth with her daddy & mama on Game Day.

So as the men talked about the dreams they had for their Noles this season, I thought to myself that they have experienced multiple national championships in their lifetimes. They have felt the glorious feeling it must be to spend those nine months in the offseason knowing you won everything that everyone else wanted. And to have at least one night where you can watch your guys dance in confetti on the field and know you finally won it all.

I haven’t. The guys taking the field in the red and black on Saturday haven’t, either. That’s why it matters (and hurts) so much.

But after hearing, seeing and reliving “five yards from the National Championship” for far too long, I am leaving the crushing blows and overall pride of last season behind me. I will be barking at the television in my red and black on Saturday as we take on Dabo and the Clemson Tigers. We WOULD have to play the No. 8 team in the country right off the bat. Lord, I need a fan! This is a big year for us and we very well could be five yards closer to the National Championship come December. I would put my heart on the line any day for that.

Because, no matter what, there’s still no better feeling than when someone asks me if I went to a certain school and I can smile and say, “No. I’m a Georgia girl!”

Katy Ruth Camp is a professional writer living in Smyrna, Ga. Katy Ruth grew up in a small town in north Georgia and graduated from the University of Georgia with degrees in journalism and literature. During college, she worked as a writer and game day assistant for the UGA Athletic Association. After college, she hosted a local media outlet’s high school football show for three seasons and won first place from the Georgia Sports Writers Association for football reporting. Her father, John Camp, was a UGA football letterman and high school football coach in Georgia for over 30 years. Read more on Pigskin Peaches blog, like them on Facebook, follow on Twitter, and check back weekly on PrettySouthern.com.

2 Responses to “Kickoff the 2013 Football Season”