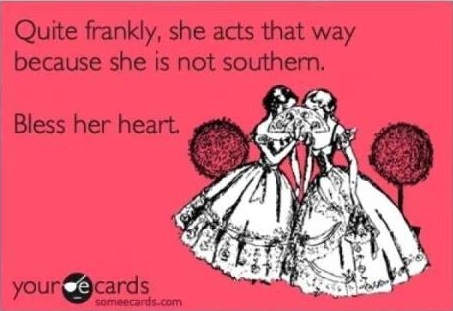 On June 29, 2011, PrettySouthern.com made SEO history by claiming the keywords “Words Only Southerners Say“. More than 65,000 hits, 419 Likes on Facebook, and 234 comments later from folks scattered around the world, we’re pleased to present our “Comments Southerners Make”. These comments come from the feedback we received from you, dear reader, and are just a sampling of some of our favorites. Y’all can read the original post here. PrettySouthern.com has been proud to support Julia Fowler and her Southern gal pals in Los Angeles in their endeavor to spread sweet accents across the World Wide Web through their viral hit Sh%t Southern Women Say.

Here we go with the things only Southerners say:

“My Yankee relatives make fun of me and my sisters any time we drop the ‘g’ off of words, like ‘fixin’ and ‘puddin’. Also, I don’t know if ‘Dumb as a box of rocks’ is only a Southern saying, but I had a college roommate from South Georgia who used it all the time.”

“He doesn’t have a pot to piss in”

“Most folks seem to agree, “G.R.I.T.S. are the bomb diggidy” 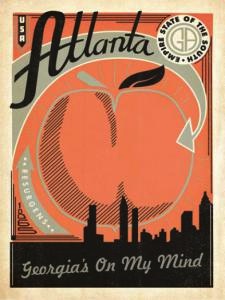 “My teacher in eighth grade was from East Tennessee, who said she was twelve years old before she learned that ‘damn Yankee’ was two words.”

“But if ya don’t like Southern Belles then well in that case, bless the hell out of your heart, honey.”

“It amazes me how a lot of Southerners do really judge and stereotype people just because they are not from the south (Yankees). I myself grew up in northern Mississippi, born in Mobile, and was the same exact way because I didn’t know any better. A lot of Southerners have never even left the South and I think that has a lot to do with it. I myself have lived all over the US from Alaska all the way to NYC. And through my observations, it’s not to different just slight cultural changes. But not in a million years would I trade anything for my mama’s fried chicken and cornbread.”

“I live in New Orleans and I totally agree with the Coke thing. I also say cold drink. Also, people from new Orleans really hate it when people say N’awlins. We never say that. Also, we say neutral ground, the grass in between streets.

“Who your people are.”

“Unless you are in Oklahoma or Texas (west says pop more than soda), but we mostly just say Cok…but here, we often mean Dr. Pepper, the nectar of the gods. Alas, Yankees didn’t get that drink until relatively recently, bless their soda-pop sippin’ little hearts.”

“Florida isn’t considered the South by the rest of the Southern states. Actually, most geographers claim that it isn’t apart of the South. It may just be where your mamaw grew up.”

“There are PLENTY of DEEP south Floridans! My family, both sides, have been in Florida for well over 100 years! True, we get more “snowbirds” (there’s a word for you, means yankee who comes to Florida to ride out winter, then goes back north, or eventually retires and stays here)than other southern states, but leave the cities, and you’ll be smack dab in the DEEP south!”

“My grandmother is from Lakeland, Florida and she uses words like “supper” to mean dinner and “fillin station” instead of a gas station. Also a “buggy” is a shopping cart. And “dilly dally” is the same as “lollygaggin”

“I live in San Diego, and have been here for almost 2 years, but I’m from Pascagoula, MS. I swear I could sell ice to Eskimos out here with my accent. I totally fell in love with Sh%t Southern Women Say. I just love hearing another Southern accent.”

“Down here in Mobile, we don’t actually say “…Mom and them,” it usually comes out more like “Hey y’all! How’s your Momenim?”

“I hear lots of Southerners saying “You Guys” now. I thought it was only here in Virginia because we are closer to “the line”, but I was in TN, GA, NC, and SC- almost everyone said “you guys”. Now people in Virginia say both y’all and you guys, like most of the South, people are not saying “Y’all” as much. It’s changing.”

“I love how my Texan mama says, ‘Window and Potato.’ She says, ‘Winduh and potatuh.’ Then, there is a word like “tight.” It’s pronounced as thought the “I” were long. Tat?

“I’LL CARRY YOU TO THE STORE. (Are you sure you can lift me? Maybe you should just give me a ride there in your car.)”

“YOU CAN PUT ME OUT AT THE CHURCH. (Why would I do that? SoundS kind of rude. I’ll let you out of the car at church, though.)”

“We never had a lot of mosquito bites. Nor did mosquitos ever bite us a lot. We were always “Eat up.” Mama’d say, “You can’t out there or else you’ll get eat up. Also, let’s discuss exaggerations. When it’s cold outside, it’s never 30 degrees. It’s always “17,000 degrees below zero.” Same thing with heat. It’s not hot. “It’s 89 million degrees outside.” And your grandmother never made a lot of food. She made made enough to feed the entire world and anyone else who might drop by. Oh, and let’s not forget to take things to the most extreme. You are not merely irritated. You are irritated TO DEATH. Nor did something merely make you laugh. It tickled you TO DEATH.”