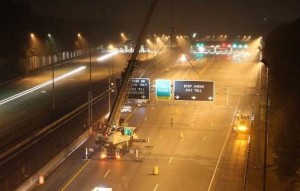 Here’s the latest update on the tolls coming down on Georgia 400. Tolls are scheduled to stop collecting on Friday, Nov. 22, “after rush hour” — which means after midnight in Atlanta…just kidding. Also, there will be a race held on part of GA 400 to celebrate the end of the tolls on Saturday, Nov. 17. What a great idea that is to close a major interstate for the road race! And won’t it be fun to pay a toll while running for 4 miles? That was meant to be sarcasm, y’all.

From the e-mail sent to Peach Pass holders:

The State Road and Tollway Authority (SRTA) has announced that the Georgia 400 tolls will officially end Friday, November 22, weather permitting. Toll collection is scheduled to end after rush hour to lessen the impact on the GA 400 commute.

In July 2012, Governor Deal announced that the state would pay off its bond debt and end tolls on GA 400 by December 2013. Southeastern Site Development, Inc., of Newnan, has been contracted for the construction component of the project and will be managed through the Georgia Department of Transportation (GDOT).

“The ending of GA 400’s tolls fulfills a promise made to commuters,” said SRTA Executive Director Christopher Tomlinson. “Enough tolls have been collected to pay for the original construction of the road and the new connector ramps to I-85, plus other needed projects in the GA 400 corridor. This road has had a tremendous economic impact on the city of Atlanta, the Buckhead business district, north Fulton County and other communities along the highway.”

“We thought it wise to conclude toll collections on a Friday evening so that motorists will have the entire weekend to become acclimated to the new traffic pattern,” GDOT Commissioner Keith Golden noted. “Still, we urge commuters the following Monday morning to be particularly cautious while driving through the plaza area.”

The demolition project will be completed in the fall of 2014.

Slow Down and Stay Alert – The Toll Plaza is now an active construction zone, with a 45 mph speed limit. For the safety of motorists and construction workers, please use caution when driving through the Toll Plaza as the GA 400 Tollway Demolition Project continues.

GA 400 Road Race on Nov. 17 – The Georgia State Games will conduct a four-mile road race celebrating the 20th anniversary of the opening of the GA 400 Extension and the ending of tolls on the roadway on November 22. The race will begin at 8:30 am at Glenridge Drive running straight down GA 400 through the Toll Plaza and finishing at Phipps Plaza on Lenox Road. Runners and walkers will pay their 50-cent toll as they pass through the toll lanes, with the proceeds donated to benefit Strong4Life. Pre-registration is required. Click here more information or to register for the race.

Editor’s Note we will not be participating in the GA 400 Road Race because it’s the UGA vs. Kentucky game in Athens. For everyone else leaving Atlanta to go to Athens on the morning of Nov. 17, we suggest not taking 285 since it’ll be a mess with drivers not realizing they can’t go south on 400.