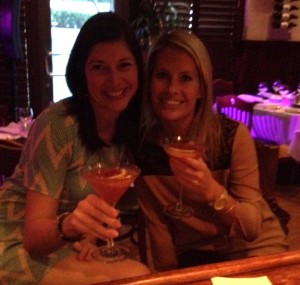 Thanks to Elizabeth at Southern Color for sharing in the fun. Cheers girl!

2013 was a stellar year for the folks at Pretty Southern. From attending restaurant openings, helping rising political stars like Matt Foster get elected, fun with our fellow bloggers, and all sorts of happenings across the South — we’ve been there to tell the stories.

Here are our favorite Pretty Southern posts of 2013.

Random Acts of Kindness – This year was a milestone for Lauraine Frank. She celebrated both being cancer free and her 30th birthday. At only 30, Lauraine has beaten cancer four times in the past decade. So she decided to give back by starting a Random Acts of Kindness (RAOK) campaign. She asked for help from her friends, and others within the sphere of social media, to join her quest to make the world a happier place and brought smiles to thousands of people across the South.

Bitter Southerner – If y’all haven’t been keeping up with the Southern blogosphere, then you missed the launch of The Bitter Southerner. Chuck Reece, an Atlanta-based writer and editor with more than 30-plus years of penmanship, was fed up with the great stories of the South going undocumented, so he set out to do just that. Every Tuesday from now ’til the Rapture (Lord willing) the Bitter Southerner will bring y’all another great story from the South. Our favorite story so far is from behind the scenes at the Clairmont Lounge.

Braves Move – Speaking of bitter, the biggest story to rock the South, and possibly the national sports scene, was the Braves flight of Atlanta into neighboring Cobb County. After reading the excellent reporting from the AJC, it appears that Mayor Kasim Reed’s office dropped the ball on the whole deal which caused the Braves to look for love OTP (way outside the perimeter).

Baselines – Now, now, we’re still Braves fans here at Pretty Southern, especially after this phenomenal music video from Aaron Chewning. He teamed up with Braves catcher, Javy Lopez, to create a music video “Baselines” spoofing Robin Thicke’s popular “Blurred Lines”. The video celebrates the Braves clinching the National League East pennant. Y’all can spot the lovely ladies from the Braves’ Tomahawk team, mascot Homer (he even classed it up to put on a suit for the occasion), and rapper Austin Miles also has a cameo. Watch “Baselines” below. 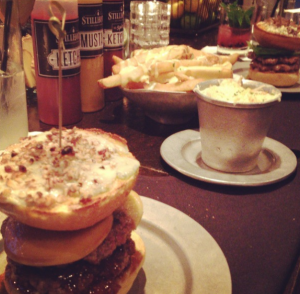 Stillhouse – This is one of the best new restaurants in Atlanta for 2013. Pretty Southern and our pal at Kitchen Causual, Katy Lucey, were privileged to attend a tasting at Stillhouse. We sat at the bar where our bartender Nicholas Bustos took excellent care of us. He kicked up a Carolina Mule by adding some fall inspiration with apple pie moonshine, ginger beer, peach bitters, and lime juice. It was the best way to serve moonshine! After ordering a round of drinks, it was time for the food. The menu at Stillhouse aims to please including deviled eggs, fried green tomatoes, crab cakes, pimento cheese, or mussels swimming in a moonshine-based broth, and bodacious burgers.

400 Came Down – The toll on Georgia 400 came down just before the Thanksgiving holiday, much to the delight of the millions of commuters who cruise down to Atlanta every day. We were thrilled to see our post get picked up on Reddit (thanks to the Redditors for the 4,000+ hits!)

Speaking of hits, we have to thank our loyal readers for their continued support (and hysterical comments) of Words Only Southerners Say. PrettySouthern.com has achieved more than 70,000 unique visitors just to this page. Thanks for your crazy Southern sayings, and keep ’em coming!

We also have to give a huge thanks to our Pretty Southern feature contributor, Kate Robertson. She’s a senior at Virginia Tech who will be graduating in 2014 and is looking for her first break in the real world in PR or Communications. Hire her, y’all! This girl can write!

And finally, we have to thank the lovely ladies at Sh%t Southern Women Say for sharing their Southern sayings. It’s always fun to work with y’all, and we can’t wait to see what 2014 has in store!