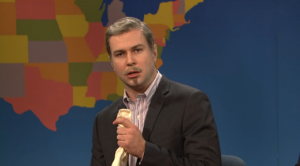 As a native Southerner, I had high hopes for SNL’s response to the Atlanta Snow Jam. The writing has been exceptionally funny this season, so perhaps Kenan Preston would play Kasim Reed and just yell at Seth Myers and Cecily Strong on Weekend Update, or maybe Melissa McCarthy would play a stranded motorist who was stuck in her car for 19 hours. I think SNL missed the boat with Taran Killam and his ridiculous Buford Calloway.

Good Lord what a preposterous name! Did he borrow his accent and costume from Django Unchained? No one in Atlanta (other than hipsters) has facial hair like that anymore. It was a cheap shot at the South…and it wasn’t all that funny. Now Bill Hader’s reprisal of Stefan, that was funny. But Taran’s over-the-top drawl and gripping his handkerchief like a sorority girl would clutch her pearls, not so much.

Jon Stewart, Al Roker, and a bevy of other commentators made their snarky remarks and America (nay the world) had a good laugh. I took their jokes with a grain of salt, even giggling a bit, and I was going to let it slide… until last night. 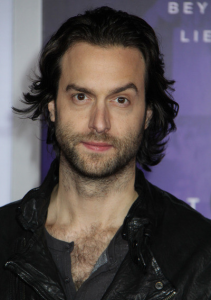 I attended Chris D’Elia’s show at the Atlanta Improv Comedy Club. Chris opened his sketch with a few ribs at Atlanta’s collective freakout to the 2.6 inches of snow. He said that being from Los Angeles, people in L.A. wouldn’t have gotten all worked up, they would have just shrugged and said “Whatever.” I’m going to call B.S. on that one, Chris. Southern Californians have probably seen less powder (unless it’s going up their noses) than the majority of Atlantans.

Now granted all walks of life – regardless of race and sexual orientation – were fair game for punchlines in Chris D’Elia’s show. However, since I claim to be a Southern writer, I feel like I need to stand up for my beloved South.

As Margaret Mitchell once said in an interview about Gone With the Wind, “If the novel has a theme it is that of survival. What makes some people come through catastrophes and others, apparently, just as able, strong and brave go under? It happens in every upheaval. Some people survive – others don’t. What qualities are in those who fight their way throughout triumphantly that are lacking in those that go under. I only know that survivors used to call that quality gumption.”

The brave and strong had their moments in Atlanta during Snowpocalypse. The brave were the teachers who stayed the nights with their students, the strong were the people who helped push cars along the icy interstate roads, or who trekked up-and-down giving food and drinks to fellow Georgians who were stranded on the highways.

Over the past few days, the common question I’ve gotten from a lot of folks has been, “How was your snow jam?” This is coming from people here in Atlanta, and as far north as my girlfriends in New York City. “What happened?” my convert-Yankee pals want to know.

Here’s what happened – our government failed us because no one had the gumption to close the schools. After closing schools earlier in January due to extreme cold (though lack of snow) administrators caught a lot of flack. When schools close, we all know its going to be bad, and folks stay home. Since the schools were open, and everyone had to work, we all were glutton for punishment when we scrambled to get home.

Atlanta is now a textbook case for future emergency managers. Our local FEMA leaders have to test their emergency plans to be sure we can take an “all-hazards” approach to preparedness. What if this had been a dirty bomb instead of 2.6 inches? Atlanta would have had thousands of commuters dead on the interstate, with corpses inside those abandoned cars.

Atlanta is my home. I’ve lived in the metro area since March of 1996, that’s almost 18 of my 28 years (minus four glorious years in Athens and a few months in Florida). We’ve seen snowfalls worse than this, but we have never seen such a colossal failure.

Georgia lawmakers have got to get some gumption now. The gentlemen and ladies at the Capitol who have the gonads to enact change better do so. This city cannot have another catastrophe or else citizens, and especially recent transplants, are going to move away to greener pastures. Not to mention the cheap shots from comedians and commentators will keep on coming.

P.S.
Chris D’Elia is performing tonight and tomorrow (Feb. 7 & 8) at the Atlanta Improv if y’all want to hear more jokes about ignorant Southerners. I suggest we all throw cotton balls at him.