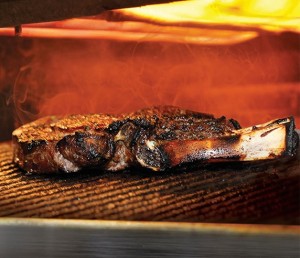 Steak in the broiler at New York Prime.

When it comes to fine dining in Atlanta, the classic steakhouse is in a category all its own. Atlanta is the Southeast’s mecca for delicious filet mignon thanks to local providers such as Buckhead Beef, Brasstown Beef, and a bevy of other sources for grass-fed beef from local farms.

Before we sit down to supper, here are just a few notes about how we made this list of our favorite Southern steaks:

To kick off our list of the top 10 Atlanta steakhouses, here’s a quote from a famous Southern lady:

My father always said that Fondas can cry at a good steak.”
~ Jane Fonda 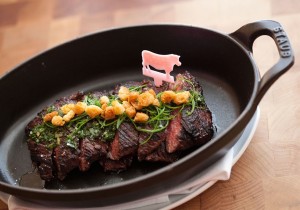 BLT Steak served with herb butter in a cast-iron pan.

1. BLT Steak – Located inside the swanky W Atlanta-Downtown, its full name (Bistro Laurent Tourondel) is an homage to its founding partner, Chef Tourondel. BLT Steak “integrates traditional elements of the French bistro with an American steakhouse and combines its signature rich warmth and texture with the sophistication and style of Atlanta.”

2. Blue Ridge Grill – A sister restaurant of Bones (both are owned by Liberty House Restaurants) is a true staple in the Buckhead dining scene. The ambiance is inspired by the Blue Ridge Mountains of North Georgia. Besides 5-star filets, Southern-inspired menu highlights include grilled Georgia Trout, skillet-seared mussels and a sumptuous corn soufflé.

3. Bones – Established in 1979, Bones celebrates it’s 35th anniversary this year. Celebrities including Leonardo DiCaprio and Jim Carrey have dined at Bones. Ask your server to point out President Bill Clinton’s table, along with President Jimmy Carter’s table where he’s dined with his grandson Senator Jason Carter (who is now running for governor).

4. Chops – The flagship steakhouse of the Buckhead Life Restaurant Group. Chops was the premier steakhouse of Peachtree Street long before the St. Regis Atlanta opened its doors. The pepper steak is our favorite filet with a cracked peppercorn crust, brandy pepper sauce, mushrooms, port braised shallots, and potato confit. Pair it with a flash-fried lobster tail, served with honey mustard sauce and drawn butter, for a truly indulgent meal.

5. Hal’s on Old Ivy – nestled off a tiny road where Buckhead’s business district meets the neighborhood bar scene, Hal’s is the place as Jon Watson wrote for the AJC:

“Tables of cougars clinking wine glasses eyeball the young professional set jockeying to be the next batch of well-to-do regulars, and local celebrities and politicians routinely make appearances.”

6. Kevin Rathbun Steak – Mr. Rathbun helped parlay Atlanta fine dining to prominent stature. “Only one and a half block from Rathbun’s and Krog Bar, Kevin found an old cotton warehouse and turned it into one of the Top Steakhouses in The U.S. (Details Magazine).” Word to the wise when using GPS, don’t confuse Kevin Rathbun Steak with his newest establishment KR Steak Bar, which opened in the Peachtree Hills neighborhood in 2013. 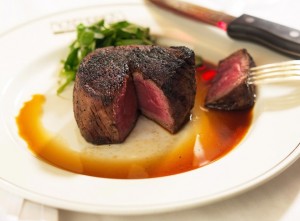 A perfect medium rare filet at McKendrick’s in Atlanta.

7. McKendrick’s – For nearly 20 years, McKendrick’s has gone above and beyond to provide stellar steaks and Southern hospitality. Executive chef Thomas Minchella regularly posts recipes to his blog, but dining at McKendrick’s is a true Atlanta steakhouse experience.

8. New York Prime – consistently ranked as one of the best restaurants in Atlanta, New York Prime is right up there with the classics in Manhattan. The guys running this joint are some of the nicest damn yankees in the South.

9. Parker’s On Ponce – As Decatur’s only steakhouse, Parker’s was founded in 2008 by brothers John-Thomas and Christopher Scott. Parker’s is a welcome addition to historic Decatur, just four miles east of downtown Atlanta. There’s a ScoutMob for Parker’s for $20, which is almost a free steak! And unlike other steakhouses, Parker’s offers you a side item of your choice including broccoli, mashed potatoes, hash browns, or french fries. Now that’s Southern hospitality.

10. Prime – To round out our list of the top Atlanta steakhouses, we had to include our favorite restaurant at Lenox Mall. Prime is a steak + sushi concept redefining the idea of surf & turf. As part of the Here To Serve restaurant group, anyone with a Friend of Tom card enjoys 10% off their meal.

An honorable mention goes to New York Butcher Shoppe for being the best retailer of prime filets in Atlanta, and across the South. For steakhouse quality steaks made at home on your grill, visit a location near you.

So what did y’all think of our Top 10 Atlanta Steakhouses? Let us know in the Comments below.

4 Responses to “The Top 10 Atlanta Steakhouses”