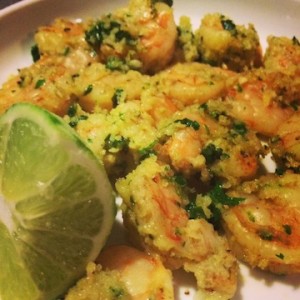 Our take on Panko crusted baked shrimp with cilantro and lime.

In an effort to save money we’ve cut back on going out to eat, so I’ve started making more of the recipes I pin on Pinterest. After all, I somehow had to justify to my husband that I was in fact pinning with a purpose. Hubby really liked these Shrimp with Avocado, Mango, & Tomato Salsa, which was also a Pinterest find, so I decided to try out these Cilantro Lime Baked Shrimp from Gimme Some Oven. It was another perfect Pinterest supper!

Now we reduced our recipe to only 1 lb. of shrimp since we were serving two people, so for four people definitely spring for 2 lbs. of shrimp. Also, you’ll have to whip up a side dish — or perhaps serve these as tacos with Sriracha sauce — because these tasty morsels just aren’t quite enough to make a meal of their own. Regardless, these shrimp are tasty and definitely going into my recipe rotation. Here’s what y’all will need for Cilantro Lime Baked Shrimp with Panko: 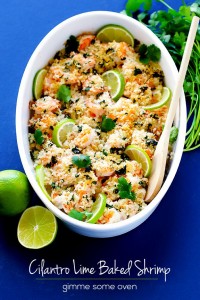 Gimme Some Oven’s picture is a lot prettier!

In a medium bowl, add shrimp, garlic, lime zest and juice, cumin, and a generous pinch of salt and pepper and toss to combine. Transfer the mixture to a greased 11×7-inch or 9×13-inch baking dish.

In a separate bowl, stir together the melted butter, Panko, and fresh cilantro until combined. Sprinkle the Panko mixture evenly on top of the shrimp.

Bake for 15-18 minutes, or until the shrimp are pink and no longer opaque. Remove and garnish with extra lime wedges or cilantro if desired.