Flirt of the South 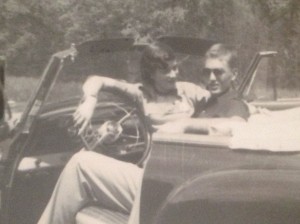 The Flirt of the South with her beau.

“Hey, soldier boy!” With those three, flirtatious words, a love story was born.

My namesake and grandmother, Mama Ruth, had met her Norman on a double date with her best friend one hot Georgia summer day in the mid-1950s – only, he wasn’t her date. A few weeks later, when nothing had developed further from their respective dates, Mama Ruth was sitting in a car with her girlfriends at the drive-through. Over giggles and the radio, she turned and saw a tall man in uniform walking by. “That’s Norman,” she told her friends. “Oh, he is so handsome, Ruth,” they remarked. So she rolled down the window and yelled out those three, unforgettable words with a sweet, melodic voice, one that still fills the room with sugar when she tells the story today. He smiled, walked over to the car, leaned over to her window and said, “Well hey there, Miss Ruth.”

The result of that small, flirtatious exchange was more than 50 years of marriage and one of the most incredible, loving, meaningful and impactful love stories I have ever witnessed.

There is no doubt that there is an art to flirting, and I would dare to say that Southern girls have mastered it.

Southerners as a people are raised to have manners, to respect others, to respect ourselves, to take chances and that you catch more flies with honey. So, naturally, the ability to flirt is somewhat ingrained in our culture. Shoot, flirting may as well have been invented in the South. 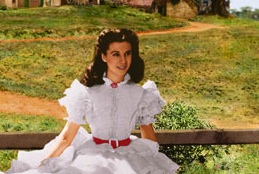 Since colonial times, when French settlers fleeing Haiti settled in Savannah, the term “coquette” has evolved into the modern Southern Belle. Southern girls know that eye contact, approach, a smile and some sweet sass go a lot further than aggressive locking of eyes or playing it cool and hoping he will somehow notice.

In “Gone With the Wind,” Margaret Mitchell writes about how Scarlett O’Hara’s mother, Ellen – who was raised to be a great lady in Savannah – trained Scarlett how to “smile so that her dimples leaped, how to walk so that her skirts swayed entrancingly,” and the other arts of coquetry.

Much of our communication with others, whether it be with an attractive boy or the lady in the check-out line of the grocery store could be considered a form of flirtation. We like to be friendly. We like to be welcoming and happy. And we like to get what we want, even if what we want is to simply make other people feel good about themselves. Some may see flirtation as a form of desperation but, really, how could connecting to people in a sweet, positive manner that can only illicit smiles be considered a character flaw? No, I say the art of flirting is rather a wonderful thing.

Of course, even as a born-and-bred Southern gal, flirting is never that easy.

During those moments when my family and friends point out “cute boys” nearby, or introduce me to a single friend, I am constantly battling the awkwardness of the flirt. It is an odd thing to try to interpret someone through potentially double-edged words and looks. What do I do with my hands? Did that sound stupid? Why is he looking at me that way? Is he flirting back? Oh God, do I want him to flirt back? What have I gotten myself into?

But then I remember I am Ruth’s granddaughter and that flirtation is a two-way conversation. If I’m not hearing what I want, I can sweetly end the conversation and go on my way until I hear and feel what I desire and deserve. 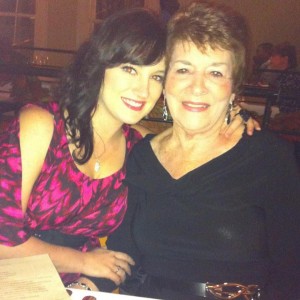 I was speaking recently on the phone with Mama Ruth – Flirt of the South – in the midst of a party in Little Five Points (yes, I took a break from a party to speak on the phone to my grandmother), and of course she asked me if I had met someone yet. I said no, but I’m sure my Norman will come along and I’m willing to wait rather than settle for less. Of course, she agreed, but continued to stress how much she wanted me to meet someone in the guilt laden but kind way only she could.

Then she asked if I had met my 17-year-old cousin’s boyfriend, her first. I said no, but that Anna Kate had told me a bit about him. “Well,” she said in her sweet, Southern voice, “I was sitting on the porch swing with her the other day and I asked her if she had kissed him. She wouldn’t tell me. I told her she’s been with him a while now, she needed that boy to kiss her already. I also asked her if I needed to teach her how to flirt. She is so terribly shy, you know. But she wouldn’t take me up on it,” she said, with a giggle.

Mama Ruth then proceeded to share stories with me about how the boys in the neighborhood would line up outside of the house to spend time with my mother, the second-best flirt I’ve ever known. “You know, your Mama could look anyone in the eyes, smile and say two words to them and they would fall in love with her,” she sweetly recalled. I then shared a surprisingly strong memory of my own, of lining the pre-school boys up along the wall of my day care when I was three or four. I would dance in a circle with one then, when I was done with him, I would thank him and offer my hand to the next boy. Of course, all of this was done in my “twirly dress,” the only kind of clothing I wanted in my closet for most of my single-digit years.

Katy Ruth Camp is a features and college football contributor for Pretty Southern. Born and raised in Cartersville, Ga., and a proud graduate of the University of Georgia Grady College of Journalism and Mass Communications, Katy Ruth lives in Smyrna, Ga., and is a freelance writer; the owner of the college football blog, Pigskin Peaches, the director of development for The Georgia Ballet and the owner and artist of Little Crow handmade jewelry.

One Response to “Flirt of the South”