The 150th Anniversary of the Battle of Atlanta 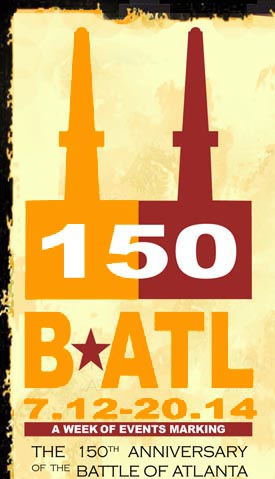 July 22, 2014 will mark the 150th Anniversary of the historic Civil War Battle of Atlanta.

It’s hard to believe the Civil War came to a close almost 150 years ago. Luxury SUVs now cruise through the battlefields of Kennesaw, Georgia, where the Confederate troops made their last stand against the Union Army. General William Tecumseh Sherman would decimate the remainder of the Southern forces during the Battle of Kennesaw before his army would roll and fire its way into Atlanta in July of 1864. His war machine rolled through to Savannah effectively crumbling the South.

I remember when we first moved to Kennesaw, and my mother (a teacher for many years) asked her school’s assistant principal a question. “Why aren’t there any of those antebellum houses in Atlanta?”
“Miss Morgan!” he gasped. “Don’t you know that Damn Yankee Sherman burned them all?”

His words “Damn Yankee” stuck with me, as I spent my adolescent years growing up near the battlefields of Kennesaw Mountain. Margaret Mitchell wrote that Sherman was the villain in the stories she would hear about the decimation. Now, it’s almost the 150th Anniversary of the Battle of Atlanta.

Taking place from July 12 – 20 (also my birthday week!), B*ATL will host the a series of events commemorating this defining moment in our city’s history. From the B*ATL website

“To commemorate the important event, the neighborhoods in Atlanta’s 5th Council District have teamed up to organize B*ATL. This will not only be an event of remembrance but also one with fun for everyone including: a Gala Dinner, a 5K run, Tours, a re-creation of the front lines with Re-enactment Soldiers and artillery, a Civil War to Civil Rights Tent with civilian re-enactors, historic music concerts and dramatic performances, shopping and dining in East Atlanta and Kirkwood and more!”

The B*ATL Committee is hard at work finalizing this year’s events. Please check back here over the coming weeks for updates, plus keep up with them on Twitter.

Lauren Patrick is the editor of Pretty Southern.com. A native Southerner, UGA graduate, and Georgia Bulldogs fan, y’all can find her writing, wining, and dining in Atlanta. Keep up with her & Pretty Southern on Twitter, Pinterest, and Instagram.