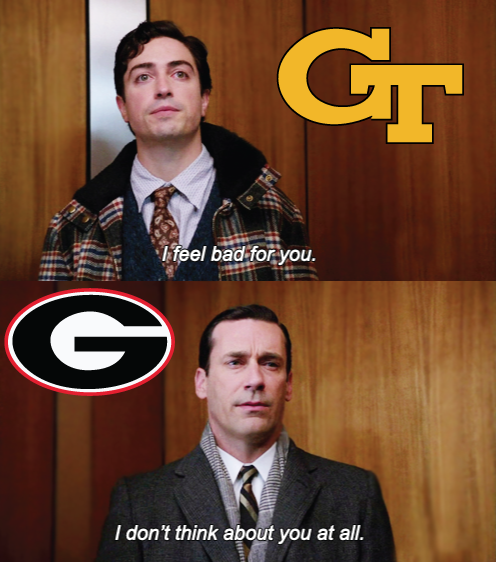 “Clean, Old-Fashioned Hate.” Let’s take this one all the way back to 1917, with one of my favorite Georgia-Georgia Tech stories told to me by one of the greatest storytellers ever, Loran Smith, paraphrased and told not nearly as well as he did, of course.

During World War I, many schools, including Georgia, lost nearly all of their male students to the war and most of UGA’s students-turned-soldiers left to fight in France. Subsequently, Georgia canceled football for the 1917 and 1918 seasons, not only because many of the athletes were fighting in the war, but also to show solidarity to them. Georgia Tech, however, chose to become a military training ground of sorts and thus had plenty of new athletes ready to play. Tech continued to play football during those seasons, reveling in and counting victories against the remaining teams who chose to play. 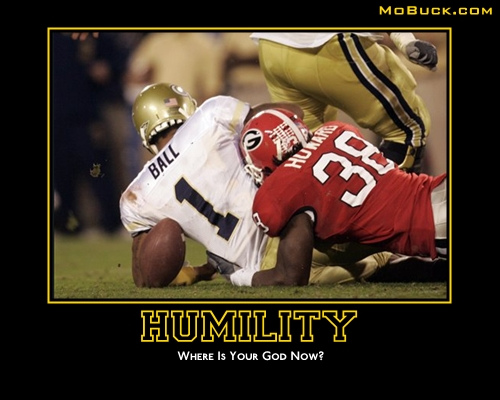 When UGA started football back up in 1919 and the Georgia-Georgia Tech game was set to resume, the student body held a parade in Atlanta, mocking Tech for continuing to play football during the war. Students saw the fact that Tech was using its new military students to play football, along with having enough male students who didn’t fight in the war to be able to play in the first place, as disrespectful and worthy of Tech being publicly ridiculed. The parade featured a float shaped like a tank with the words “UGA IN ARGONNE” written on it. Behind the tank float were three students clad in all yellow riding in a tiny car with a sign that said “1917 TECH IN ATLANTA.” 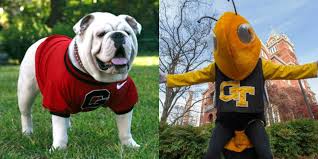 This made the Tech president so mad that he refused to allow Tech to play any sports against Georgia until Georgia apologized. No apologies were ever made and Georgia and Tech didn’t renew their agreement to play against each other until 1925. That’s the same year the Tech president retired. ‪#‎GoDawgs‬ ‪#‎WreckTech‬

In the mighty words of Larry Munson, “Hunker it down one more time!” Let’s finish this season by adding to our glorious 12 of 13 winning record over Tech. UGA vs. Georgia Tech 2014 airs on the SEC Network at 12 p.m. (noon) on Saturday, Nov. 29. Finish the fight!

Finish The Fight from Georgia Football on Vimeo.

Katy Ruth Camp, Pretty Southern’s college football contributor, was born with football in her blood. The daughter of a longtime high school football coach and UGA football letterman, Katy Ruth was raised in a football home in the small town of Cartersville, Georgia. Katy Ruth graduated from the University of Georgia with degrees in journalism and literature and, during that time, she worked as a writer and media assistant for the UGA Athletic Association. After college, she hosted a high school football show for three seasons and won first place from the Georgia Sports Writers Association for football reporting. She has also won state and national awards for business and feature writing. She continues to write on a freelance basis but is also the director of development for The Georgia Ballet and the owner and artist of little crow handmade jewelry. Read more on Pigskin Peaches blog, like them on Facebook, follow on Twitter, and check back weekly on PrettySouthern.com.