Letter From The Editor to All of Charleston

We here at PrettySouthern.com aim to be a voice of the South, a place where your opinions can be heard. In 2010, Pretty Southern entered the blogosphere and social media. I, Lauren Morgan Patrick – with the help of my husband, friends, and fellow writers – launched this website as a home to tell stories, your stories, about the South. Being Southerners, born and raised in the South, hearing Southerners share their stories and love of this land is essential to our existence.

Before March 18, 2015, our most popular post Words Only Southerners Say helped us to reach more than 100,000 people every year who want to relish in those glorious Southern phrases distinctly our own. In the past 24 hours, we’ve heard from more than 43,000 Southerners who all have opinions they wanted to share about the city of Charleston.

A dear friend of Pretty Southern, whom most of y’all know by now, lived in Charleston for the past six months and decided that this city, your city, is not for her. After hearing her sentiments, I asked her if she would be willing to share her thoughts on Pretty Southern. It wasn’t about click bait, or yellow journalism; this was an opportunity for her to tell her story. We’ve all had different experiences unique to our own paths in life. Her experience in Charleston was her own. 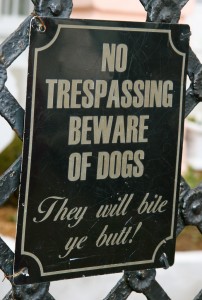 My husband snapped this pic on a trip to Charleston. It’s so true.

As a woman, especially a Southern girl who was raised on “yes ma’am”, “yes sir”, “please”, and “thank you”, I was appalled at some of the comments posted to this blog. From the 43,000+ hits and 400 comments – which have all now been taken down – I think I read every swear word in the English language. There were F-bombs. There was the n-word. The trolls crawled out from the depths of the internet to sling some of the most profane, misogynistic, and violent insults I’ve ever read. And these folks claimed to be Southerners.

To protect the institution of Pretty Southern, albeit a “puny blog” as someone called it, I took down that editorial. Pretty Southern is my labor of love, my digital home. I invited a guest into my home to share her opinion with our Southern readers and things got completely out of control.

Tomorrow morning, Friday, March 20, at 8:10 a.m. EST, I will be live on air with Charleston’s The Mix 96 FM. Please submit your questions you would like for me to address in the comments section below.

If you have an interest in contributing to Pretty Southern, we would love to have you. We reserve the right to edit your material, but this is a place for y’all to be heard to. As a disclaimer, no other media outlet was responsible for taking down this post. It was in response to the uncontrollable rascals sharing their rather violent two-cents.

Thanks for reading, and (seriously) bless your heart.

Lauren Morgan Patrick is the editor of Pretty Southern.com, a native Southerner, UGA graduate, and Georgia Bulldogs fan. Y’all can find her writing, wining, and dining in Atlanta. Keep up with her & Pretty Southern on Twitter, Pinterest, and Instagram.

88 Responses to “Letter From The Editor to All of Charleston”