The Only Snow Accumulation Scale a Southerner Needs

It’s just over a month into 2016 and Mother Nature has already blessed us with a big blizzard. Fortunately Chattanooga didn’t get hit too badly, but my friends and family in other states are still digging out.

Winter stinks. It’s just not a fun three months. It’s cold, gray, dreary and colorless. And then there’s snow and icky winter weather. As soon as the s-word is mentioned, my mind goes into overdrive. The weather forecasts often change, and snow accumulation ranges aren’t always descriptive enough. The meteorologists on TV say your area will get six inches of snow. What does six inches of snow look like? How do you prepare? How long can you expect to stay inside? Will schools be closed?

What does that even mean? #SouthernProblems 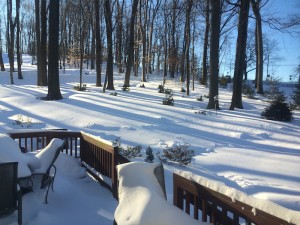 This is where my years living in the Great White North come into play. I hate snow, but I know how to deal with it. My sweet mother hates winter almost more than I do.

The Only Snow Accumulation Scale a Southerner Needs:

0 – 6 inches: No worries. You can shovel your way out easily, and it’ll probably all melt by the end of the day, if not before. You might not even need a shovel (but buy one just in case). Oooh and ahhh at it while it’s around. Schools will probably still close, or at least run on delays.

6 – 12 inches: Girl Scout mode. Be prepared, but it’s not the end of the world. The shelves at the store won’t quite be empty. Go out and play in the snow. Build a snowman. Get some cookies, too, because, you know, Girl Scout mode and all.

12 – 18 inches: Grocery store, Target and Chick-fil-a run. Make those runs as early as possible. Shelves will empty faster this time. Make sure you have bread, eggs, milk, canned food, batteries, blankets, etc., and charge all of your electronic devices. Grab some extra layers of clothes. Schools will definitely be closed. Get a chicken sandwich and waffle fries while you can. Maybe even buy an extra one for the next day. 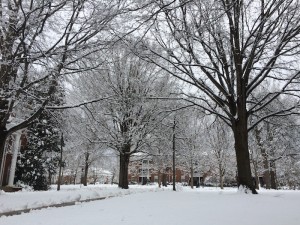 18 – 24 inches: Hunker down. It might be a while before you can get out. Accept that cabin fever will set in eventually. Break out your favorite board game for entertainment. Yeah, remember board games? Scrabble is my jam. Coloring books are also great. I’m an adult, I promise.

24 – 30 inches: Hope and pray that maybe the weatherman missed it and it won’t be so bad. They’re wrong sometimes, you know. But if they’re right, schools will probably be closed for a week.

36+ inches: Just pray. Pray and wonder how unfair it is that people can get paid six figures for being wrong, one way or another.

Once you’ve assessed the appropriate accumulation, you can prepare and plan accordingly. Now if only the meteorologists on TV could get behind this, then winter might be more bearable.

Until then, I’ll be sitting on my couch, wrapped in my heated blanket, drinking hot chocolate and waiting for winter to go away. I really hope that groundhog was right.

A version of this post also appeared on my blog, A Thought and a Half.