No, You’re Not Racist if You Voted for Trump

On Nov. 9, Kathryn Stockett, author of The Help wrote:

Forgive me for referencing my own book but I feel like Hilly Holbrook was just elected president.

For those of y’all who love Stockett’s book as much as we do here at Pretty Southern, you know what the writer implied. Hilly was a racist and the antagonist in the novel. Her character represented everything wrong about the way white Southerners treated people of color. Now, here’s another quote from The Help that I think we as a country need right now:

“You is smart. You is kind. You is important.”

The past week has been exhausting. On Election Night, I didn’t watch the live broadcast or stay up late to see who won. Around 10 p.m., my husband checked Google to see how the electoral college votes were coming in; with Trump ahead by 60 votes, that’s when I knew this game was over. I almost had a breakdown.

As bedtime approached, I was standing in our kitchen when I nearly collapsed. I had to catch my breath. The magnitude of this situation hit me: the world is not okay. There is so much in this world that I want to change and improve, and the flood of it all hit me as I filled a glass of water in the kitchen. I shut the water off and braced myself over the sink, taking in a few deep breaths, and reminding myself that I have the power to impact change. I did not cry. I went to bed hoping, praying, that when I woke up then the world would somehow be a better place.

While I love living this Pretty Southern existence, there is too much happening in the world to only focus on the pretty parts. Two weeks ago, my friend was senselessly murdered in his own apartment. This week, an accused rapist and actual racist was elected president. Like many of you reading this post, I unleashed my frustrations on social media: 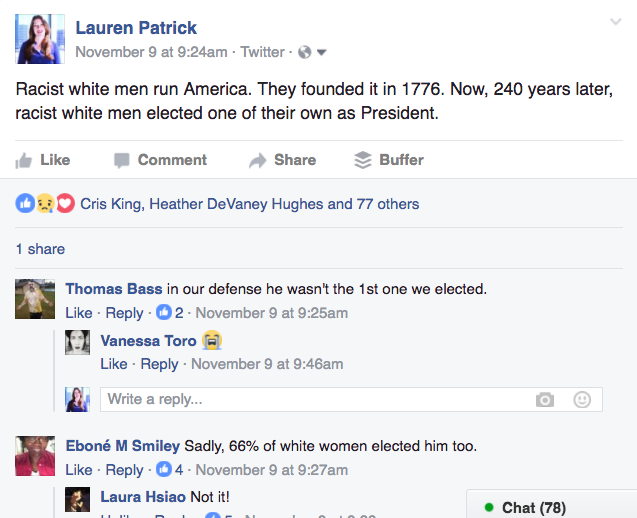 First, I want to apologize

To you, who voted for Trump, who think I called you a racist: I’m sorry. It wasn’t meant to be taken personally. You’re not a racist unless of course you actually are, but I’m not calling anyone out on an individual basis because that’s between you and the good Lord in heaven. My commentary was meant to spark a discussion, which it certainly did. I posted this because I wanted to see the dialogue and conversations which would come. And we need to keep having these conversations because racism is a huge, monumental problem in this country.

As a nation, we have to say it’s not right that the KKK is still in power, enough power to endorse a president. It’s not right to use sexist and misogynistic words such as “grab her by the pussy” and “bleeding from her wherever.” It’s not right; but somehow, millions of Americans ignored those hateful words and said “sure, I think you’ll be a better president than Clinton.” This election was won by a white misogynist and racist who shouted the loudest, regardless of what those words actually were.

Jessica Shortall found the words to express the sentiment:

“To my friends (yes, friends) who voted for Trump: You say you voted for Trump for reasons entirely absent from hatred, racism, and misogyny. You are sick of being called a racist, a misanthrope, a sexist, a xenophobe.

This status was meant to be a wake-up call that this world, our country, is not okay.

The amount of hate speech that’s flowed and what our own kids have done to each other in the past 72 hours since Trump was announced President-Elect is atrocious. Just look at what happened on Day 1 in Trump’s America.

“Many of you are uncomfortable identifying as a racist, misogynist, xenophobe or homophobe. However, you are obviously ok supporting someone that is all these things. But in siding with Donald Trump and his unapologetically hate-filled views you have cosigned and validated his viewpoints. And his viewpoints are all of those things.

“You did not stand up for me or anyone else that he attacked with his words. Instead, you gave him a pat on the back & told him that the things he says are acceptable. You rewarded his behavior with your vote. So, whether or not you believe all the things he has said to further marginalize people and groups, you have, in fact, condoned it.

“Neutrality is comfortable. But neutrality contributes to oppression. You, my friends, are guilty of oppression as long as you try to straddle the line of supporting Donald Trump the politician without condemning his rhetoric.

“So, what can you do? Stop sitting in silence. Because as long as you are silent and go along with the hate that is around you, you are a co-conspirator and you are responsible for the hatred and division we are experiencing.

“I do apologize if this upsets you or makes you feel uncomfortable; however, it wasn’t meant to make you feel warm and fuzzy. I cannot keep dancing around your feelings at the detriment of the greater good.” – Paige

She also shared this awe-inspiring quote from Desmond Tutu.

So does it mean that you’re racist if you voted for Trump? No. It does mean that with everything this man said in the election — every misogynistic, xenophobic, and racist comment — you somehow still thought he would be the best leader for America. It is you, our fellow American, who now have the responsibility to help make our country a better place. We’re in this together to truly Make America Great Again.

Now let’s talk about the zeitgeist for a second, y’all

Quick vocab refresher: the zeitgeist is the defining spirit or mood of a particular period of history as shown by the ideas and beliefs of the time. The slogan “Make America Great Again” is part of our national zeitgeist. The defining spirit of America is anger. Millions of angry Americans voted, and millions are angry at the outcome. Dave Chapelle’s opening monologue on SNL pretty much sums of the zeitgeist of America in late 2016.

So what do we do now? What are next steps? How you, my fellow American, personally plan to be part of the change?

Let’s end the hate speech together.

Our pal Chuck Reece at The Bitter Southerner wrote, “only the hardest conversations yield real understanding. We’ve been down that road, and we have to commit to go farther down it, into the swamps, into the scariest parts.”

It’s time for us to come together, as Americans, to move our society forward in a positive direction. What we must do now is to continue having tough conversations. We look at small steps we can make to help our neighbors, our countrymen, and billions of other people on this Earth we call home. We have to come together as the United States of America. Like my mother said to me over our post-election brunch:

“Put on your big girl panties and deal with it.”

Momma Lynne dropped some harsh truth on me as I sucked down a spicy Bloody Mary. She said that as a journalist, I have a responsibility to be a voice of change. It’s my choice which direction I want to take, and choose to take the high road. “You’re such a positive person,” she told me. “Use that positivity.”

So to you, my fellow Southerner, American, citizen of planet Earth: it’s time to find a way to work together. It’s time to help each other. We have to end the name calling, the prejudices in every way, shape and form. The human race is going to have to combine forces to stop global warming. Yes, climate change is real and if we don’t do something to change our behavior then our planet, our home, is going to suffer. We, as a people, are better than the current zeitgeist.

We are smart. We are kind. We are important. 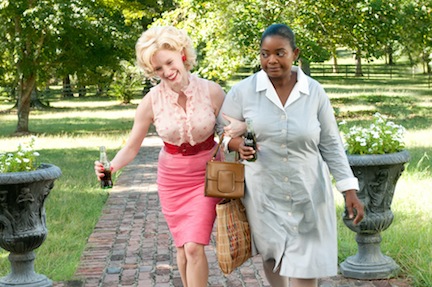 2 Responses to “No, You’re Not Racist if You Voted for Trump”