Phil is a native New Yorker who's lived in Atlanta since 1984. Phil, his wife Sarah and his two children, Brian and Alison, live in Dunwoody. Phil attended Emory University for his bachelor's, then Georgetown for law school. For more than 30 years, Phil has worked as an attorney in Atlanta and now blogs about being a Damn Yankee. Follow Phil on Twitter

Han’s immortal reply was: “I don’t know kid; I can imagine quite a bit.” So, when I heard a Braves talking head during a recent exhibition game to tout the traffic and parking situation as “not nearly as bad as you might imagine” (not exactly a ringing endorsement in the first place), I began channeling my inner Han.

First some background and full disclosure: I had the opportunity to play a small part in bringing Turner Field to Atlanta before the 1996 Olympics. As a baseball fan and an Olympics buff, it was one of the highlights of my legal career. My daughter learned to love Chipper Jones and baseball (in that order) there. Let’s just say I have a soft spot for the Ted. And as a fan of “win-win” deals, what wasn’t to like? The Braves got a stadium on the IOC’s dime and it was kept downtown. They even eschewed the naming rights and called it Turner Field.

Having dealt with the Braves back before the Olympics, I should not have been surprised when they announced after a short 10 years that they were leaving their free stadium downtown for a free stadium in Smyrna.

The Braves don’t just look a gift horse in the mouth; they perform oral surgery.

But the kicker was where they put the damn thing. We all thought it was a joke. Infuriated, I swore that I would not set foot in SunTrust. And then I decided to attend the charity game between UGA and Mizzou came around. I figured I’d use that day as my opportunity to see the park under ideal circumstances. 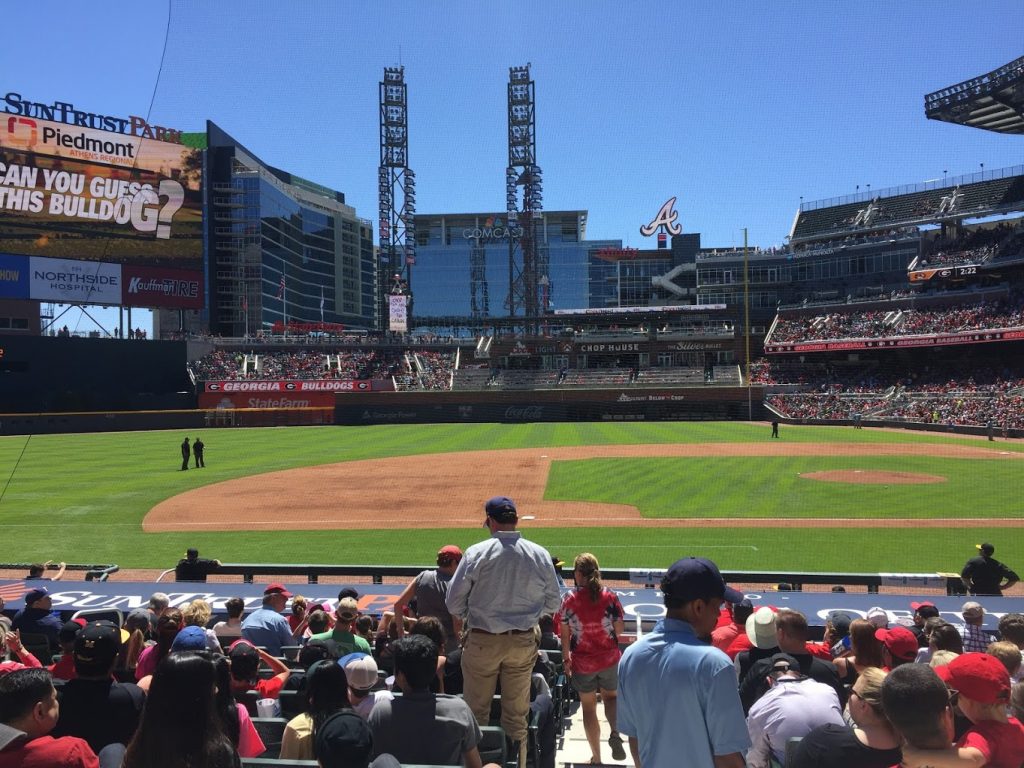 The game was on a Saturday at 1:30 p.m. It was a sunny day. It was spring break. The Masters was on TV. There was nothing else going on that would clog I-285. Waze was cued up, ready to guide me to my very own parking space, just like the nice Braves lady said.

Then, reality threw me a little chin music. I sat seemingly forever as traffic cops refused to stop traffic on Cobb Parkway to allow game traffic to head to the lots. Waze pointed me to parking lots that were closed to the public and then just sort of gave up. I ended up in the “east parking”, which turns out to be a parking deck for an office building.

As I circled the deck, I was mentally calculating just how long it would take to get out of that deck on a game night. I settled on “forever.”

All told, it took me a full hour to park; TWICE as long as it took me drive there. And then there was a nice walk over two bridges to get to the stadium. I shook my head. The parking attendant shook his head in solidarity.

The stadium itself is very nice but has absolutely nothing to set it apart. It has zero “wow” factor. Once inside, you could be in Terra Haute. You look out over the outfield wall and see . . . nothing. It isn’t AT&T. It isn’t Camden Yards. It isn’t Nationals Field or Globe Life Park in Arlington. And guess what, boys and girls? It isn’t even The Ted.

Does it have nicer amenities? Sure it does. Would a new car have more bells and whistles than the car you bought a few years ago? But, if you are there to watch a ballgame, it’s at best a draw and I prefer to see the Atlanta skyline than the nondescript Comcast building.

The Ted had charm and history. SunTrust has all the allure of a shopping mall and it is clear that was the idea all along. I will spare you my outrage at a $14 BBQ sandwich and a $9.50 beer. Apparently, the Braves think Terrapin is brewed in Athens, Greece. I shook my head. The beer lady shook her head in solidarity.

So, I’ve been to the circus and I have seen the elephant. It’s white.

What are your thoughts on the Braves new SunTrust Park? Let us know in the comments section below