A Prayer from the Bulldog Nation for UGA vs. Notre Dame

Jenn Ciccarelli is a local Atlanta marketer with a penchant for college football (the Dawgs, of course!), whiskey and live music. Life loves include all things marketing, entertaining (let’s be honest…eating) and planning adventures, particularly trips to far away places. Jenn currently lives in East Atlanta with her gang of brown dogs. #GoDawgs Follow Jenn on Twitter

Editor’s Note: every Saturday when UGA plays this football season, check out Pretty Southern for a prayer for the Bulldog Nation. Praise be! 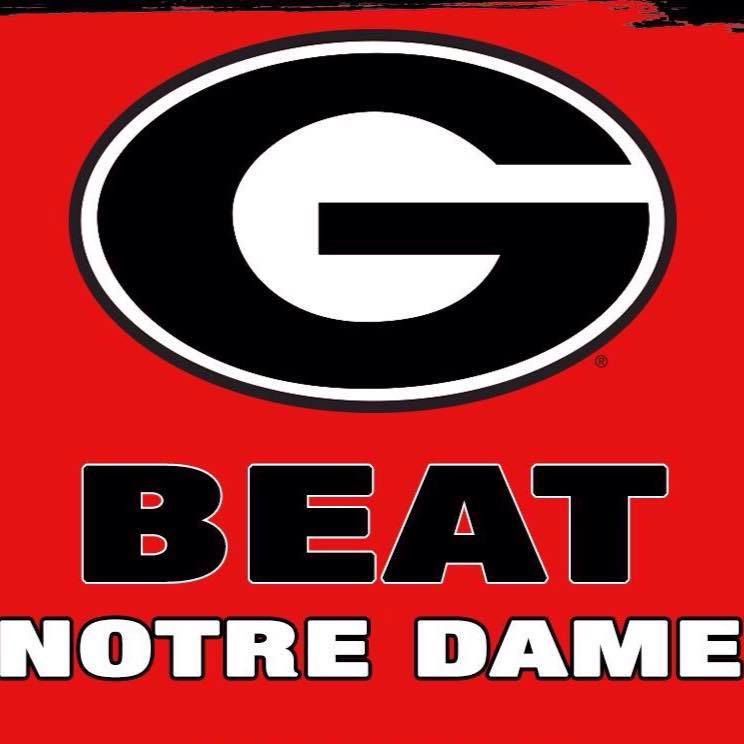 I would like to take a serious moment and start the prayer by nicely asking if you could just clap-on/clap-off the hurricanes, baby ruler. Or, if they have to come, maybe just a brief stop over Gainesville where nobody gets hurt but maybe their fields get real soggy. Also, in the event that all of this catastrophe is signaling the end times, well, we’ll see ya real soon!

On with the show! Speaking of on with the show, Jesus, do you remember last weekend? When ya half scared us to death then delivered us from evil? I hear you’re real good at that.

A heartfelt Get Well from the Bulldog Nation to Jacob Eason and a big fat, literal, THANK YOU JESUS for Jake Fromm. Wooeee, that kid.

Today our boys in their silver britches are taking on some team in the North who calls themselves Notre Dame. First of all, Jesus, do you know that Notre Dame is French for “Our Lady.” What are they even talking about? There is no OUR here, Jesus. She’s literally YOUR mom. I wouldn’t take kindly to a buncha Yankees making such claims.

And worse than being Yankees, Jesus, THEY ARE CATHOLICS. Now, I know they claim to be your people and all, but think about it. Catholics believe people shouldn’t have birth control and that if they just don’t have S-E-X, they won’t get pregnant. Again, lordlet, I would just like to remind them who your mom is. I would also like to remind them that hanging a giant tacky picture of someone in your house without their permission is just not something someone in the SEC would ever do. Touchdown, Jesus, indeed.

I wish I could say it stopped there, but it gets worse. THEY’RE IRISH. Fighting Irish, in fact.

Not sure if you’ve been in any bars lately, small savior, but the drunk redheads with the silly accents are usually the first to go down. Who can’t win a fight against the stumbly guy, child chief?! This shouldn’t be a problem for our mighty Dawgs!

These Yankee gingers call their stadium the House that Rockne Built. Uh, what’s a Rockne?
I obviously did some research from the other Good Book, Wikipedia, and learned that he’s some coach from 1918? Honoring some ol’ dead coach? Is this the guy with the silly houndstooth, Jesus? This Bend in the South sounds quite inferior to Athens and Sanford Stadium with its glorious hedges.

We come to you today, petite deity, asking for another fire game for Fromm, safe runs, caught balls, and for that powerhouse defense of ours to stop those little Mary’s (no offense, you know we’ll hail her if we have to) dead in their tracks!

In your tiniest little pair of hobnail boots wearin’ name we pray,