Editor’s note: this article is contributed by Shane Vaiskauskas. The last time UGA played in the Rose Bowl was 1943. We won against UCLA, 9-0.

“I’ve been here before,” I thought to myself, nervously. 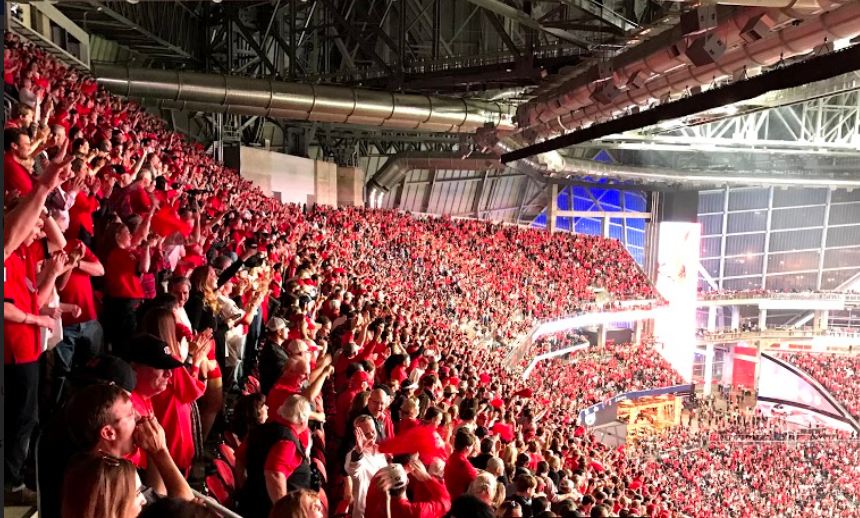 Not literally here, mind you. This was my first visit to Mercedes-Benz Stadium. But five years prior, just a few hundred feet away in the recently-demolished Georgia Dome, I had watched the Georgia Bulldogs carry a one-score lead into the fourth quarter of the SEC Championship Game against Alabama.

Here I sat, in the upper end zone corner, in a seat I paid $700 for, as the clock expired in the third quarter of the SEC Championship Game. Auburn had converted a third down, then gained 12 more yards on a QB run. We led 13-7 as the quarter ended.

“I’ve been here before,” I repeated to myself, trying to avoid getting my hopes up.

The band played “The Planet Krypton” as they have in the fourth quarter of every Georgia game I can remember. The fans turned on their cell phone flashes to light up the stadium as they have since last season.

“I’ve been here before,” I repeated to myself, tuning out the fans around me, discussing defensive adjustments and how we just need to finish out the game.

The whistle blew to start the fourth quarter. The players lined up. A handoff to Auburn’s injured star tailback, Kerryon Johnson. From perhaps a literal mile away, it looks all too easy for Johnson to gain 4 yards. The defense finally makes the tackle. We see the ball squirm out. Roquan Smith, Georgia’s star linebacker, sees it too. He scoops it up in stride. Turnover. Four plays later, we score a touchdown.

Georgia would go on to hold Auburn to a 3-and-out, then add another touchdown a few plays later to ice the game with over 10 minutes remaining. Auburn fans head to the exits. The score would not change again: 28-7.

After the game, the team is presented the SEC Championship trophy on the field. The majority of the stadium–Georgia fans–stays behind to watch. By winning the SEC Championship, Georgia has guaranteed a spot in the College Football Playoff. We’re two games away from our first national championship since the 1980 season. 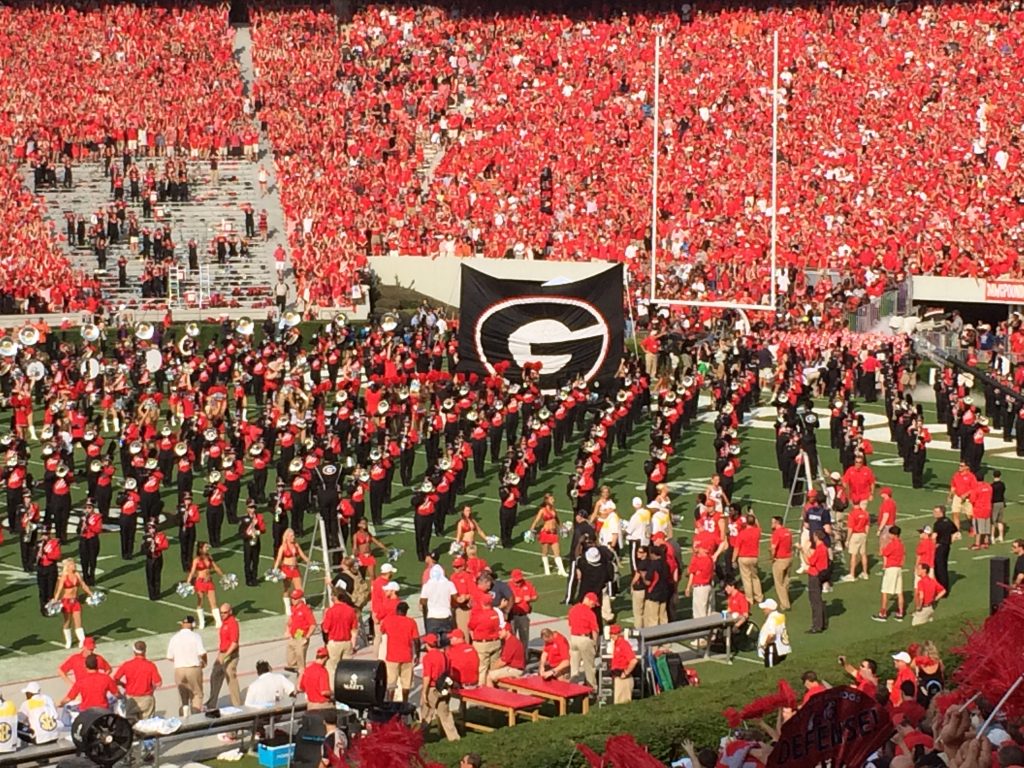 Georgia is a storied college football program. We are one of the sport’s so-called blue bloods, whose relevance in the sport has rarely waned. We have a large stadium, a rabid fan base, plenty of 10-win seasons and bowl victories, and a raft of players in the NFL. There are over a hundred major college football programs that would trade places with us in a heartbeat.

In the past 20 years, prior to this season, we had won the SEC and the Sugar Bowl twice each. We’ve had a #1 preseason ranking, a #2 final ranking, the #1 overall pick in the NFL draft and plenty of first-round talent. We’ve been a perennial top-10 team, but we never broke through to the national championship conversation.

And yet, we’re still very much the outsiders. Our best, most exciting teams of the past two decades have all stumbled at the wrong time.

In 2002, our 13-1 record was good enough for third. Ohio State and Miami, both undefeated, played each other for the championship.

In 2005, our two losses kept us firmly out of the picture, despite winning the SEC.

In 2007, an inexplicable loss on the road to Tennessee cost us our spot in the SEC Championship Game, and with it, our chance for immortality. We finished the season ranked second. In 2012, we were four yards away from beating Alabama. They went on to throttle Notre Dame and win it all. It was their hundredth title, probably.

Five SEC teams have won national championships in the past 20 years. Georgia isn’t among them. Our rivals are happy to remind us. Analysts are happy to remind viewers. We’re a perennial also-ran, a team too good to ignore entirely but not good enough to believe in. Our fanbase is large, loyal, and loud, but our bark is worse than our bite.

Deep down, this has been a sneaking suspicion, my quietest fear. What if we never win? What if all of the time, money, and passion I’ve put into this team never amounts to anything? What if four yards short against Bama is the closest I will ever see? I’ve already witnessed 30 fruitless football seasons, how many more do I have left?

Do I dare get my hopes up? 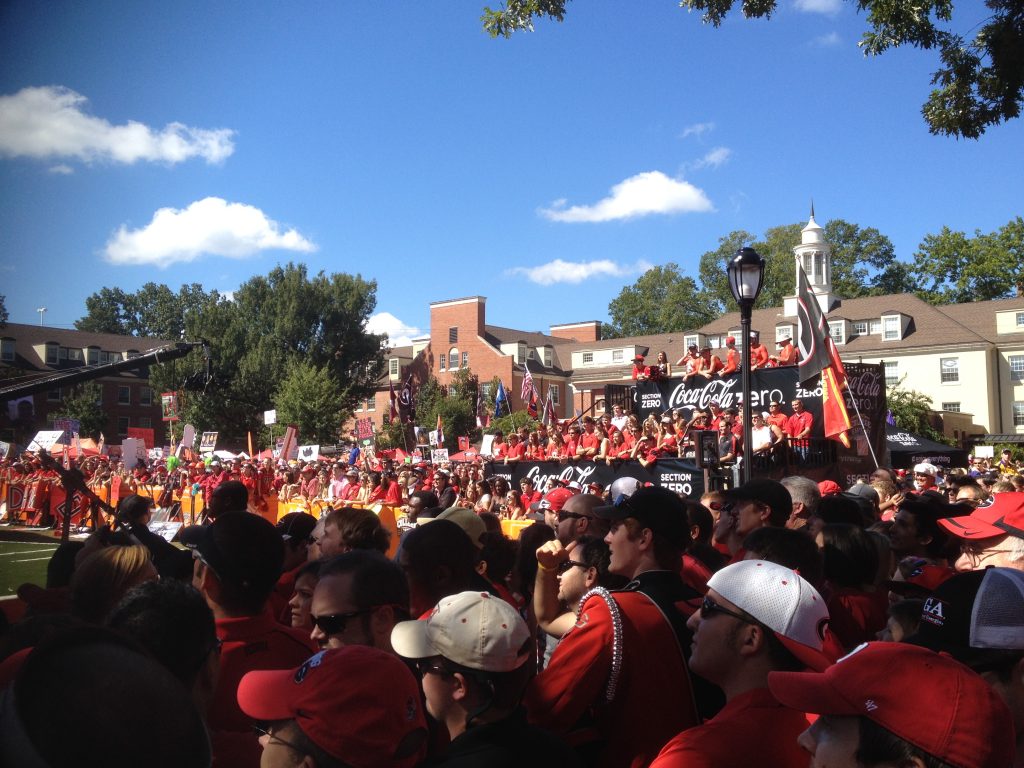 Over the past few weeks, Georgia has gained momentum in the national college football conversation. Countless networks covered our practices and provided updates not just to fans, but to casual observers. Analysts break down our film and compare our strengths and weaknesses to the other playoff teams. Two-by-two, the rest of the country played their bowl games. Their seasons will end short of where we are right now, and then they will turn their attention to the four playoff teams remaining. To the Georgia Bulldogs. To my team.

They’ll talk about how our defense reads and reacts so well, how our front-seven are so adept at stopping the run, and how Roquan Smith is a field general at middle linebacker. They’ll talk about our freshman quarterback, Jake Fromm, who never seems to let the moment be too big for him. They’ll talk about our senior tailbacks, Nick Chubb and Sony Michel, who chose to return to school for a shot at a championship instead of getting rich in the NFL. They’ll talk about our charismatic young coach, Kirby Smart, who played for Georgia in the 90’s and has his alma mater back to national relevance in only his second season.

The entire country now knows about this team what Georgia fans hoped would prove true all year: that we belong here. That it was worth it. That pledging your heart to something as pointless and capricious as a football team can someday deliver an emotional payoff, even at the University of Georgia.

We’ve traveled to Pasadena, CA, to play Oklahoma in the Rose Bowl. That may be where the season ends. On the biggest stage I’ve ever seen Georgia play, we may suffer through yet another disappointment. This season’s Dawgs, like so many before them, may be left to limp home after a heartbreaking reminder that we still do not yet belong.

But we might not. We might beat Oklahoma and advance to the title game a week later. We might even win that and be memorialized for all time as the best team of 2017. In my lifetime, we’ve never played for such high stakes on such a large stage. 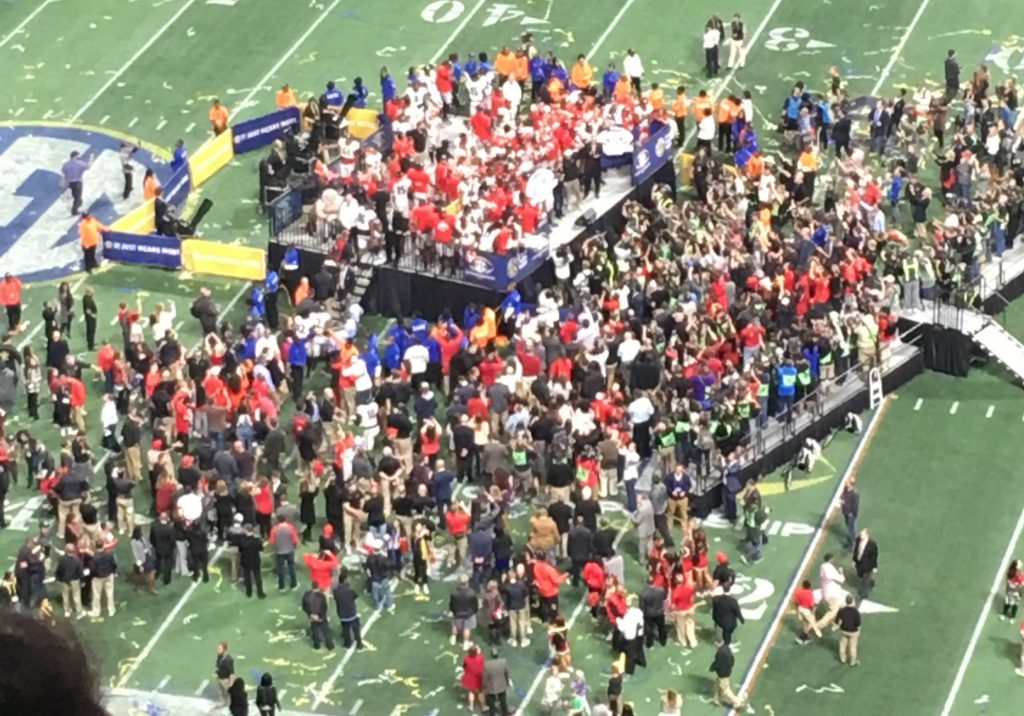 At the end of the SEC Championship festivities, before we filed out into the concourse with the other Georgia fans, I sat back in my seat, closed my eyes, and sat in silence for 30 seconds. Then I pinched myself. This time, it was really happening.

I’ve never been here before. But I’m going to enjoy the hell out of this ride. 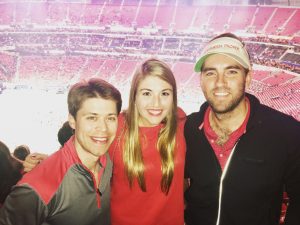 Shane Vaiskauskas is a management consultant who lives in New York City with his wife and their growing collection of board games. Shane grew up outside of Atlanta and, after the better part of a decade, graduated from the University of Georgia in 2009. He hosts a moderately popular Dungeons & Dragons podcast called Total Party Thrill, and tweets about sports and other meaningless games, @Mundangerous. Shane is pictured here with his sister, Caitlin Vaiskauskas, and best bud Jeff Putnam.