Q & A with Daren Wang – “The Hidden Light of Northern Fires”

Daren Wang is not a native Southerner but his roots run deep. 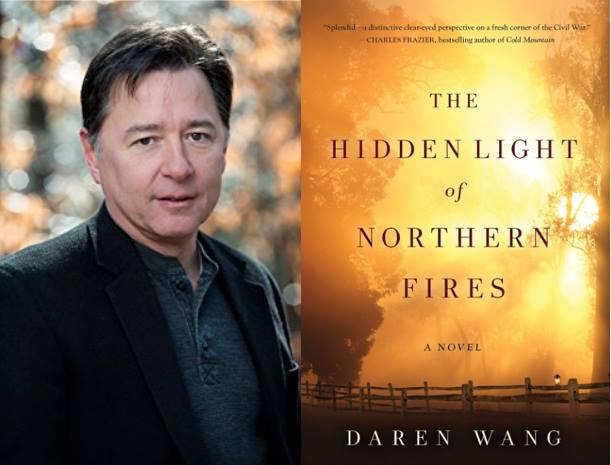 Wang is the author of The Hidden Light of Northern Fires. While this is his first novel, he has a unique vantage point on what makes a successful story since he served as the executive director of the Decatur Books Festival for 12 years (he’s also the founder).

Before launching the festival, Daren had a 20-year career in public radio, both national and local. He’s also written for the Atlanta Journal-Constitution, Paste Magazine, and Five Points magazine, among other publications.

Editor’s note — I could gush on about how much I loved The Hidden Light of Northern Fires, but instead y’all can read my Amazon book review.

Daren and I were introduced by a mutual connection, Decatur’s own Susan Wietsma. We connected over coffee at Dancing Goats on a hot summer morning where we talked about writing, the South, and the state of our world. He was kind enough to let us publish some of our Q&A on Pretty Southern.

Read on to learn more about Daren Wang and The Hidden Light of Northern Fires.

Tell us your story and what led you to the path of writing your first novel.

“I grew in the little rebellious hamlet where the book is set, hearing stories about how the town had seceded from the Union. The firemen all wore patches that said ‘Last of The Rebels’. People always talked about our house, and once, the local news came and did a story about it being part of the underground railroad. The weight, the uniqueness of the story didn’t strike me until I’d come south and spent a lot of time with Southern authors. After I found an oral history of the Willis family, the people who built the house, I started researching and eventually had to write.”

What’s the elevator pitch for your book?

“In the only secessionist town north of the Mason Dixon, a young woman risks everything to run a stop on the Underground Railroad.”

Your home is in Decatur where you founded the Decatur Book Festival. What do you see for the future of your city and the South?

“Decatur has so much going for it. I think it’s going to grow and prosper moving forward, but I think some of what makes Decatur unique will be lost. Of course, that’s the story with so much development these days.”

How has the Southern literary scene changed over the years?

“The term ‘Southern Writer’ gets fuzzier every day. In the 1960s, the defining list of Southern writers was so clearly Southern, there was no question: Faulkner, O’Connor, Welty, etc. You just knew. Today, the term gets applied loosely. I wrote a book about a young woman on a farm 15 miles from the Canadian border in Western New York, and it is largely considered a Southern Novel. If something is rural, people think of it as Southern.”

“I’m not sure what Southern means anymore.”

What advice would you give to an aspiring writer? Would you share some of your secrets to success?

“Marquez’s One Hundred Years of Solitude looms large, along with Frazier’s Cold Mountain and O’Connor’s A Good Man is Hard to Find. Chuck Rosenthal’s The Loop Trilogy is the funniest thing I’ve ever read, and heartbreaking too. Natasha Trethewey’s Native Guard. Ask me again tomorrow, and I’ll have a different list.”

You have an incredible, eclectic taste in music that’s showcased in the mixtape you put together for The Hidden Light of Northern Fires. What inspired you to publish this and share it with your readers?

“I grew up a vinyl junkie and ran record stores for years. Songwriting, as much as anything, inspires the sentences I write, and the way I tell stories. I planted dozens of little musical nuggets, you might call them ‘Easter eggs’, throughout the novel. I wanted to give credit to the source of so much of went through my head as I wrote.”

Who are some of those folks you’d like to give shoutouts to?

“I’ve got a long list of acknowledgments in the book, but this week, I want to give a shoutout to Julie Wilson, who took over for me at the helm of the Decatur Book Festival. She’s done a great job wrangling that, and I’m really proud of the work she’s done.”

What comes next? What are your goals for 2018 and beyond?

“I’ve been tooling around with the next novel, but the structure, the spine of it just came clear to me over the last week or two. I’m hoping to settle in and get this next one written.”

The Hidden Light of Northern Fires is now available in hardcover, paperback, Kindle and audiobook via Amazon. Keep up with Daren by following him on Twitter. And while you’re at it, follow Pretty Southern, too. #LoveTheSouth.