Five dynamic women leaders from the Metro Atlanta area will be honored at the first annual SHERO Awards by the Greater Atlanta Democratic Women (GADW). Originally planned as an in-person celebration, the event will be held virtually on Friday, Aug. 28 at 7 p.m. EST.

“Throughout their careers in business and government, these women leaders have made important contributions to make our world safer and more just. They continue to influence and affect change to ensure a better world now, and in the future for our children, and for generations to follow,” said Mindy Boggs, President of the GADW.

The GADW is proud to announce the first SHERO honorees are: 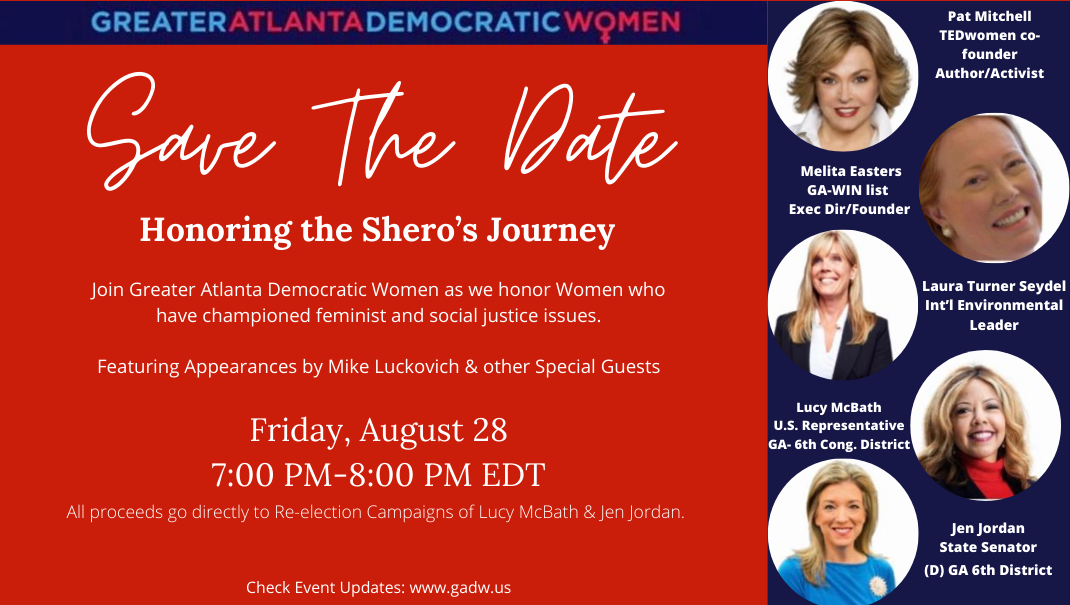 All five honorees are scheduled to appear live.

To celebrate these incredible women, the GADW has commissioned Pulitzer Prize-winning political cartoonist Mike Luckovich to create an original drawing of the five “Super Sheroes.” The popular artist will make a special appearance during the program to unveil this tribute to the honorees.

The annual event will also celebrate the first anniversary of GADW’s founding. Additional plans are being made to make the event unique, informative, and entertaining to support the re-election of both Congresswoman McBath and State Senator Jordan — a donation of $100 will be split evenly for their campaigns.

About Our SHERO Award Winners

U.S. Rep. Lucy McBath pulled the biggest Georgia Democratic upset of the 2018 midterm elections when she unseated Republican Karen Handel to represent Georgia’s 6th Congressional District. McBath co-sponsored the HAVEN Act, and important legislation to support Pell Grant recipients. She serves on the Judiciary and Education & Labor Committees in Congress, and is campaigning for re-election this year.
More info at www.lucyforcongress.com.

State Senator Jen Jordan has built a reputation for keeping public servants accountable, and corporations honest. She used the power of public pressure via social media to insist that the Kemp Administration and federal officials publicly meet with residents whose health was affected by ethylene oxide, a known carcinogen emitted by the SteriGenics plant in Smyrna. Although the town halls were attended by hundreds of concerned community members, Governor Kemp refused to close the plant to mitigate the issue. Senator Jordan continued the pressure via social media until county officials used their power to temporarily close the plant until the issue was addressed. The Senator has been a leader in providing information to her constituents in real-time via Twitter, and to stimulate public dialog to uphold transparency and accountability in our state government. She has also been encouraged to run for higher office, but is seeking re-election to continue her service in the state Senate. More info at www.jen4ga.com.

Melita Easters is the founding Chair and currently Executive Director of Georgia WIN List, the state’s leading PAC for electing Democratic women. Georgia leads the south for its percentage of women legislators and the nation of its percentage of Black Women legislators. WIN List recruits, trains and supports women in their bids for elected office and Melita spends hours helping women chart their political careers. In addition to her visionary work with WIN List, Easters is also a community leader and successful playwright, who has written and produced plays on notable southerners. More info at www.gawinlist.com.

Pat Mitchell is the co-founder, curator, and host of TEDWomen. Throughout her career as a journalist, Emmy-winning producer, and groundbreaking executive, Pat focused on elevating women’s stories and increasing their representation everywhere. She is chair of the Sundance Institute and the Women’s Media Center boards, and a trustee of the VDAY movement. She is the author of Becoming a Dangerous Woman: Embracing Risk to Change the World. More info at patmitchellmedia.com.

Laura Turner Seydel is a passionate conservationist, activist, and eco-living expert, Seydel also serves as a member of the United Nations Foundation and the Nuclear Threat Initiative. More info at lauraseydel.com.

Please let us know in the comments section below and we’ll email you more details!