The Origin Story of Steel Magnolias

Have you watched Steel Magnolias lately?

The other night I popped some popcorn, grabbed a Coke Zero, and indulged my Southern female senses to the very max! Don’t worry, I didn’t forget the tissue–because we all know we need a few–dozen when watching this iconic film.

I’ve watched this film many times, but after watching it, I decided to learn more about its background as a play. Prepare yourself to laugh and cry while reading my findings. You might as well go ahead and grab some tissues too!

The Creation of Steel Magnolias 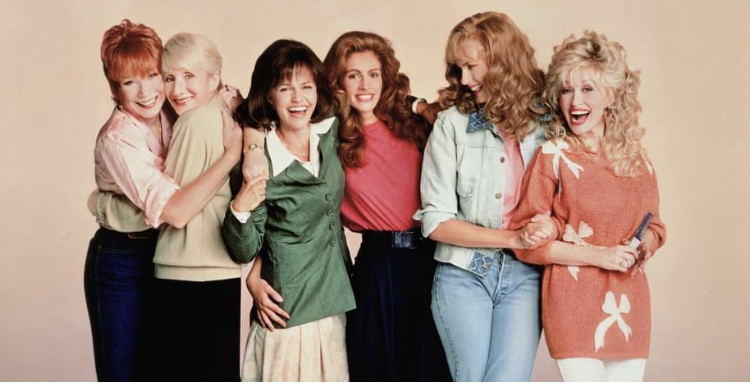 Steel Magnolias was originally a play written by Robert Harling, a true Southerner hailing from Louisiana. Harling based the work on his experience of his sister Susan dying from complications arising from Type 1 diabetes. He reimagined the last three years of her life as a play to process his grief, with encouragement from the acting class workshop he attended in New York City.

Harling originally wrote it as a short story to share with his nephew, and within ten days, his short story evolved into an entire play. In fact, one of Nicole Kidman’s earliest roles in her career was the part of Shelby in Harling’s original Steel Magnolias play.

When the play gained popularity, Ray Stark bought the film rights and began developing a movie adaptation with help from Gene Callahan, an old friend from Louisiana. Steel Magnolias would later be filmed in Natchitoches, Lousiana, Robert Harling’s hometown.

The play had been such a success on Broadway that Bette Davis herself met with Harling and requested that she star in the movie and Katherine Hepburn and Elizabeth Taylor too! Wow, what a cast that would have been!

During the film’s shoot, a major Hollywood writers’ strike occurred, and Robert Harling could not be involved in any rewrites. So, he did what any sincerely invested playwright would do: he visited the set incognito to stay involved with his passion project.

I can’t imagine anyone else other than Julia Roberts portraying Shelby. However, she was third in line for the role, after Meg Ryan and Winona Ryder. Robert Harling said, “She walked into the room, and that smile lit everything up, and I said, ‘that’s my sister,’ so she joined the party, and she was magnificent.”

The Authenticity of Steel Magnolias

If you have seen the film, then you know the main character, Shelby is sick. We all know these scenes are coming; however, they always trigger such real emotions, don’t they?

Perhaps, part of this is that instead of using actors to play the hospital staff who care for Shelby, filmmakers asked real doctors and nurses to fill these roles. Not only that, but the medical staff that appeared in the film were the same ones that cared for Robert Harling’s sister Susan during her final days.

The nurse who turns off Shelby’s life support in the film was played by the real-life nurse who provided palliative care for Susan. Despite being a scene that must have hit very close to home, Robert Harling’s mother insisted on being on set while Shelby’s death was filmed. His mother also insisted on staying until the end to see Julia Roberts get up and walk away once filming stopped. Not only did Harling write a successful play about his sister, a strong woman, it is clear that his mother was also a true steel magnolia.

Did you know the name Steel Magnolias comes from the hidden strength of what at first seem like extremely delicate flowers?

In a 2017 interview, writer Robert Harling said, “My mother would always say to handle magnolia blossoms carefully because they bruise so easily.” This combination of steeliness and gentleness inspired the name of his award-winning play and subsequent film. As we all know, the leading ladies of this film are both beautiful and delicate and as tough as steel.

In the original Steel Magnolias stage play, all of the action takes place in the beauty salon. So when the set director went looking for the perfect, quirky beauty shop to film in, she found one right there in town!

When she approached the owner about filming there, she promised to purchase her all new equipment when filming concluded. She stayed faithful to her word and revamped the local beauty shop after borrowing the old version of the store for the movie.

Speaking of beauty, both Dolly Parton and Daryl Hannah had to study hairdressing to avoid any burns, miscuts, or slip-ups while in character.

Who wants Dolly to do their hair? I know I do!

There were no men at all in the original stage play. Just like the characters in the film, the leading figures in the play form close female friendships. However, one key difference makes the action and dialogue in the play all the more unusual. Although the play characters do speak about men, no man ever sets foot on the stage.

The director of the film, Hebert Ross, was notorious for being quite critical and challenging. The all-star female cast’s bond grew stronger and stronger as they continued to support each other throughout the movie’s filming.

Harling said that he raced through writing the Steel Magnolias script, finishing it all in one go.

“The events that inspired it were so powerful that, after I found the story arena, it just poured out into my typewriter in a 24/7 tsunami of Southernness.”

Thank you, Mr. Harling, for your tsunami of Southerness. Thirty-two years later, we are still moved by your words and positive representation of strong female roles. What a wonderful reminder to not only strive to be a steel magnolia but to also recognize and appreciate the steel magnolias in our own lives.

Who are the southern Steel Magnolias in your life?

Editor’s note – credit to some of our favorite Southern publications including Country Living and Garden & Gun for their interviews with Harling.