The Generation of First Responders 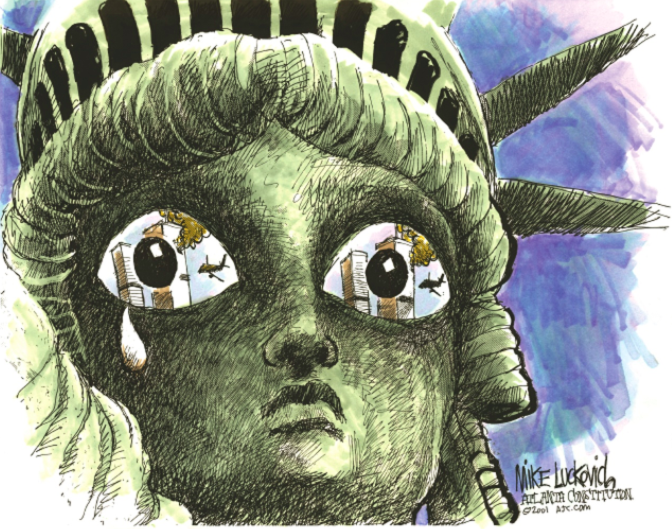 I was 16 years old and sitting in my high school math class when the intercom came on announcing the first World Trade Center building being hit. Our teacher turned on the tv and we watched in horror as another plane barreled into the second tower.

If you’re old enough to remember, you’ll never forget where you were when you first heard the news on September 11. It’s a collective trauma we share as adults.

Everyone knows what came next: 3,000 of our fellow Americans dead, thousands of troops heading to Afghanistan, tracking down Osama bin Laden, and the start of this endless war on terror. We praised and prayed for our military and first responders who answered the call that day and continue to do so.

In the spring of 2003, my senior year of high school, President George W. Bush held a rally in our gymnasium which was supposed to be a talk about the economy. As editor of the student newspaper, I got to attend.

Harrison High School is in Cobb County, one of the richest and reddest districts in Georgia. The president’s speech about being pro-business lasted all of two minutes before he said:

The gym erupted in applause. At the time, Governor Sonny Perdue sat on stage next to our school’s principal beaming, wearing nearly identical suits, their legs were crossed in the same manner until they stood clapping for W.

What I didn’t know is something we’re all coming to realize now – Cobb County is the center of poor decision-making in Georgia, from its COVID-19 response, to pilfering tax dollars for projects like the new Braves stadium.

Special interest, big business, and Big Oil are collectively what’s caused Iraq, Afghanistan, and the conflicts across the Middle East to become our modern Vietnam. These unwinnable wars resulted in countless tragedies due to mismanagement.

In the two decades that have passed since September 11, I’ve come to understand so much about the way the world works that I wish I could have told my teenage self. We live in a time of constant disruption. And society decided that my generation would be called ‘millennials’ for coming of age in this post-Y2K world.

We are the Generation of First Responders

We’re the generation that has spent 20 of our formative years remembering the tragedy of 9/11. Twenty years ago, we watched our fellow Americans fall from the towers, and last month we saw Afghanis clinging onto planes leaving their country.

We saw the first mass school shooting at Columbine in 1999, then years later we continued to cry, pray, and rage over the mass shootings in Newtown, Parkland, Pulse night club, and countless others, despite no changes in the laws to prevent deranged people from hurting our fellow citizens.

We are the ones who continue to march and protest for the same causes that our parents and grandparents did, hoping for peace in a violent world.

We recognize that our fellow Americans who are brown, black, Muslim, AAPI, and anyone who looks different than those in charge are still fighting for equality.

We want to create meaningful change for everyone, especially those whose voices are continuously ignored.

We’re the generation that grew up with Captain Planet and increasingly hotter years, where the first glaciers officially disappeared, polar bears starved, and the Great Barrier reef died off.

We’re the generation of Ferngully watching the world burn, scorching plants, animals, and our fellow humans.

We’re the generation that’s eating plastic because there’s so much of it in our oceans, rivers, and fisheries, thus in the food we put in our mouths.

We are still consuming fossil fuels at an insatiable rate with a mass shift to renewable energy still years away.

We are the first generation in 100 years having to deal with a global pandemic. Our friends are the parents of small children who grow up wearing masks to school because the adults in charge mismanaged the spread of COVID.

We are begging our family, friends, and loved ones to do something as simple as go get a shot, but ideology and self-interest prevent them from doing it for public health.

We are the ones who will be responsible for stopping the spread of infectious diseases, disinformation, and working to prevent more disasters.

We’re the generation that has to act. We have to be the first ones to respond.

There’s so much to do, and it feels impossible to fix these massive problems. But it starts with courage. Are we as brave as the first responders on 9/11 to step up and answer the call?

We can start by speaking out. We can take time to understand the ways we can change the world.

We can put forth the good effort, our money, and resources, towards actions and missions that are helping heal our broken society.

We continue to pray for our troops, our first responders, and for our politicians in charge, but God gave us working bodies and minds that also need to do more.

Professor Conrad Fink told my class of journalism students at UGA that it was our parents, the adults, who made this world and it would be up to us to report on the state of it, then help to change it.

It is truly up to us now, this Generation of First Responders.

Nothing about this world is normal. We are constantly facing a new normal. Our anger and fear have been normalized because it’s the only way we can get through the day.

We were not the first responders. The first wave of responders were the heroes of September 11, those who wear a uniform with honor, and our healthcare workers.

We are the next wave of responders. We are the ones who are willing to do the hardest things. We don’t have to be collectively scared but can get through anything if we put our hearts and souls to it.

So in the next 20 years, I hope we can build a better future. I pray we can come together as Americans, the same way we did on 9/11, where it wasn’t about a red team or blue team but truly one nation under God. Indivisible. With liberty and justice for all.

Editor’s note — this editorial cartoon is by the incredible Mike Luckovich of The Atlanta Journal-Constitution. It’s stuck with me in my mind and heart over the last 20 years